japantravel
(6 comments)
March 17, 2008
Travelog of the Moment
So I thought Monday would be mostly travel, but I got to see some important things. I braved the Tokyo subway and then the bullet trains all on my own, got to Hiroshima, and then determined to heed Josh's admonition to "don't be that girl from Lost in Translation" (i.e. sitting moping around a hotel room) I headed out for a few hours of exploration.

So, the trains. It's too bad that "and the trains ran on time" has such a negative connotation, because it's actually quite handy. They are extremely punctual, except when someone stepped in front of one... a not uncommon occurrence, maybe 2 or 3 a month - infamously the result of a nation that has A. a strong and idiosyncratic sense of honor, B. not much of a religious prohibition against suicide, and in fact a social precedent for it (A Spitzer in Japan would be dead by his own hand by this point, Josh says) and C. Really, really fast trains.

They also have thse little strips that reliably indicate where the doors of the train will open. People line up behind 'em one or two abreast, and it likely helps speed things along: 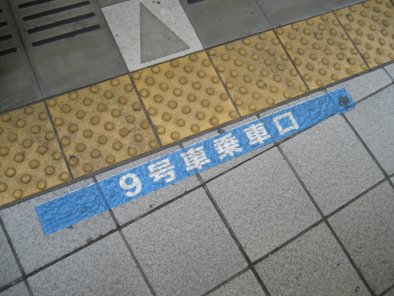 So back in the day there was a game called "Koronis Rift", that had a distinctive fractal-based landscape-- I have a strong memory of the way the game used color to show hills fading into the distance: 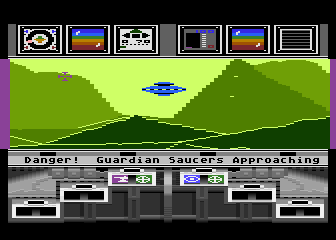 I always assumed that was a game conceit, but really, Japan from rail looks a bit like that: 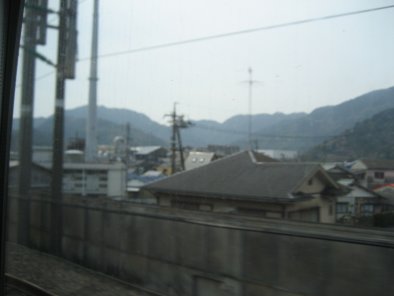 I admit to feeling a note of melancholy traveling on my own. But maybe some of that was the hazy landscape, or the feel of the rails, or maybe the Portable Dorothy Parker I was grinding through... she's a very lonely writer.

Hiroshima Station has a huge hoard of taxis waiting outside: 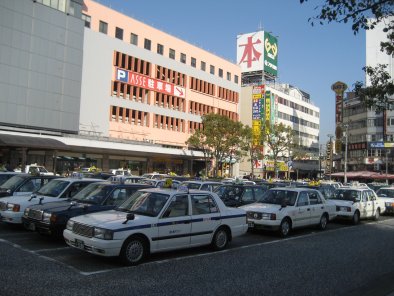 I decided to walk rather than take the tram (but, oy, I'm starting to feel all this walking) and this is a temple I saw, a bit elevated: 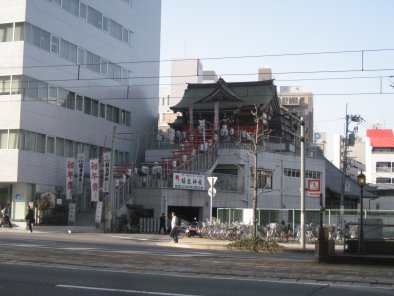 Plus I found this posture-based poster a little amusing. 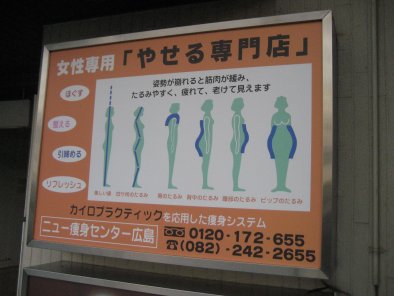 Here's another view of the pavement inserts for the blind, here you can see how some parts are linear while other parts (intersections and endpoints) are more generalized: 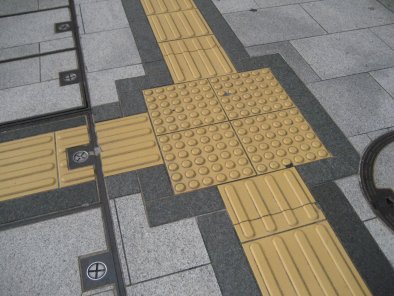 I tried to play it like I wanted a picture of the statue but really I was more interested in the guy: 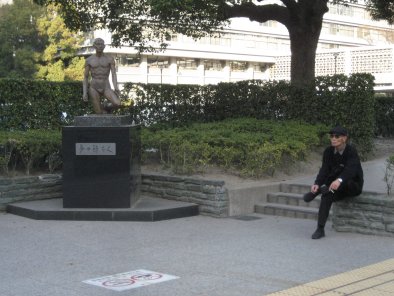 My hotel, the Rihga Royal, was surprisingly swanky, I got a really good deal on Expedia the day before. The giant sweep of lobby: 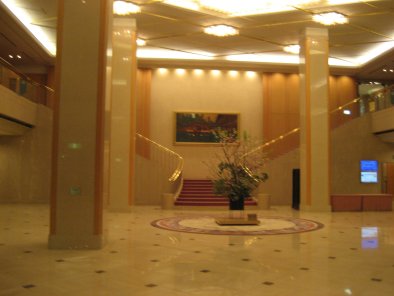 I got in after many of the attractions were closed, but I made one important trip: The Atomic Bomb Dome was just a few blocks away. This was the "Hiroshima Prefectural Industrial Promotion Hall" until the first atomic bomb exploded about 150 meters away. 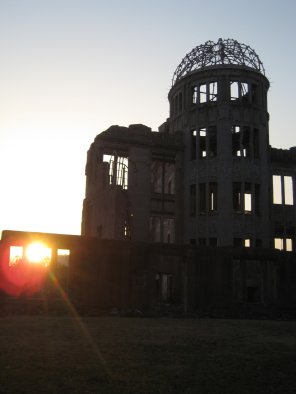 I know in my stupid blog here it's going to sound trite, but I was moved to the point of tears by its stark presence and broken grandeur. The intellectual part of me knows more people died in firebombings and massacres, and there's always the rightwingers argument that more would have died in a full invasion but... the sheer brutal efficiency of the engines of war has made humanity's chance at making it for the long haul that much worse, so in that way the blast still echoes for us all. And what does it matter that this wasn't the "worst" tragedy humanity has inflicted on itself; it was a tragedy, and I can mourn for the lives destroyed. 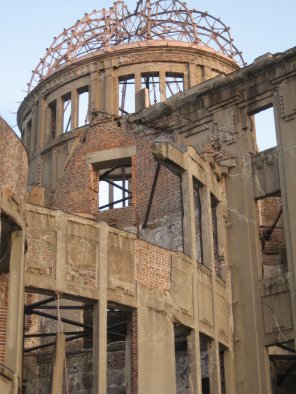 The dome is by the Motoyasu river. 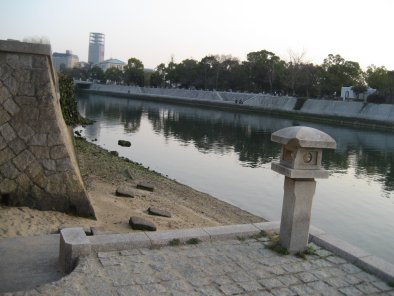 There was a surprising amount of seaglass there on the sandy bank. Maybe not worn enough to be seaglass; and some of it seemed like shards of china and other things. I gathered a few pieces. 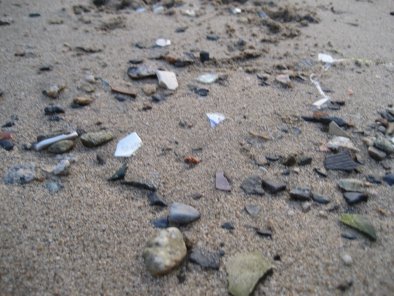 Later that evening I headed to the Hondori shopping area. I was thinking I wanted to try the cliche of checking out the McDondalds, but since I didn't want to subject my friends to it it seemed like a perfect time. (We didn't actually get anything at Wendy's before.) I...uh... think this had some kind of egg on it... 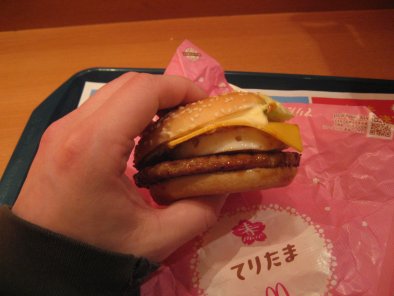 Hondori is pretty cool, almost like a normal street with a ceiling, and tons of stores. You can see the traffic light here, it's so odd to feel a bit like you're in a mall but you still have to watch for traffic: 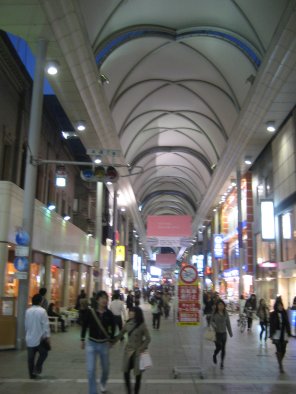 I checked out a Sega arcade, including the fun of Mario Kart 2 (it even has a builtin webcam and puts a mario mustache on you). Also, I liked the Beatles with coffee cups on their heads: 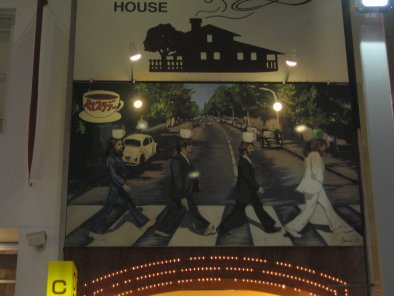 On my way back to the hotel,I was startled when what I thought was just a simple underpass and tramstop turned out to be more extensive, going on for a few blocks: 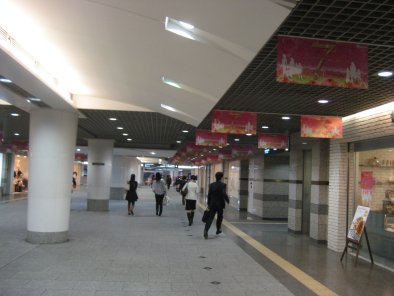 Finally a note on television: many shows have a little subpicture showing what looks like audience reaction. Josh explained "the japanese are big on group activity. The panel/audience guides the crowd reaction--shows them what to do." Which sounds kind of bad, but really that makes it a visual laugh track, but with real people. 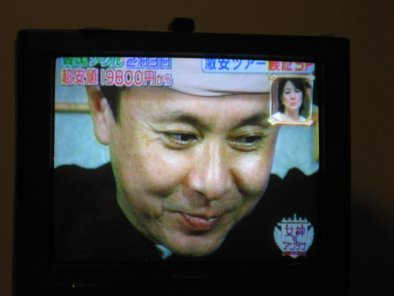