japantravel
(5 comments)
March 26, 2008
Travelog of the Moment
So today, back to Tokyo. Kind of melancholy, I can feel a part of myself working to say good-bye to Japan, knowing that while a return trip isn't out of the question, it's not assured either.

A side note from the previous day... this is a close up of my stamped ticket for the gardens at Kanazawa. I was wondering why in printing the date they would put the first two digits of the year and not the final two, but, duh, that's just a coincidence... that's the "Emperor Year", 20 years into the Heisei era... 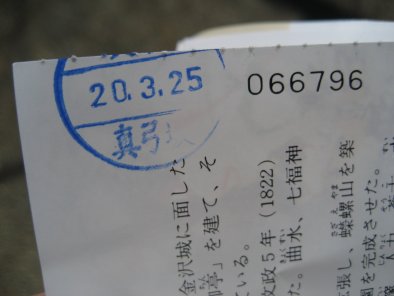 LAN3, dunno if your interest in Japan's take on 7-11 extends to "Sunkus", a similar store that seems to be borrowing the color scheme... 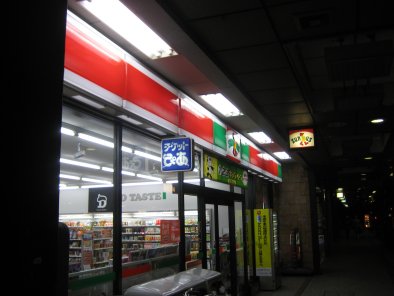 Man, Japan stores have a wide variety of drinks. I guess stores in the USA do to, but here there's a better variety of teas and coffees and fruit waters, not just colas and gatorades. 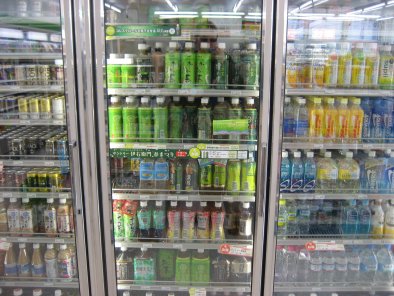 Including one called "Collagen Water". Tomomi says that's made of marrow of some kind. That's kind of gross. And very unkosher. 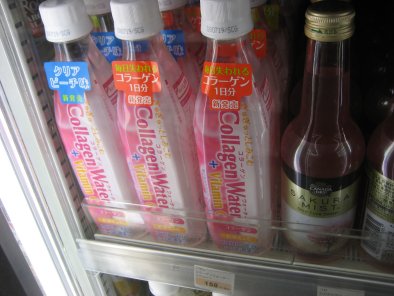 Went to a different Mister Donut. (Just a block or two from yesterdays 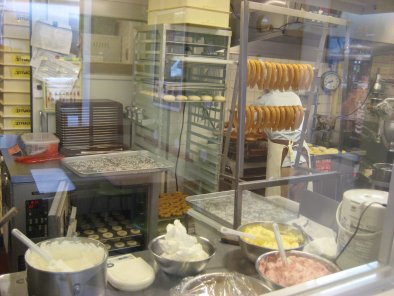 I suppose a truck full of asphalt chunks isn't particularly Japanese, but still. 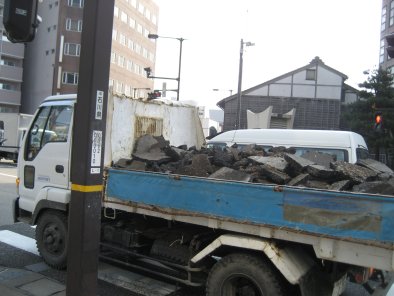 So, Josh assures me this ain't a menorah. Actually it's satellite-based distance learning center. 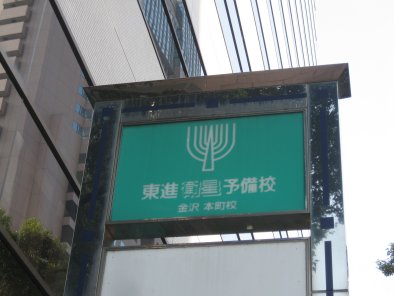 So, besides being a photo of a pretty gal, this shows the result of what seemed like a magic trick... most seats in these express trains rotate 180 degrees! I was startled when one of the women fiddled with some leverish thing and whoop, there it went, facing the other way. A casual inspection of nearby seats didn't reveal the mechanism, so I was kind of relieved when a businessman guy turned that seat back; at least I knew it wasn't my imagination. 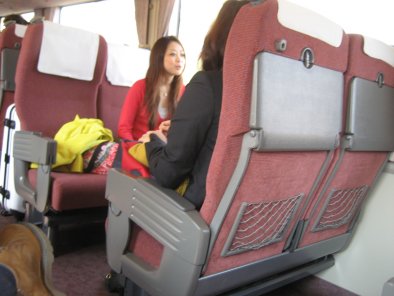 A sudden business meeting meant Josh couldn't meet me in Tokyo so I was on my own. I had two goals: get to the famous no-brand brand store "Muji" in Ginza, and then track down a store I had seen some gifts I wanted to pick up in the Electric District Akihabara. First mission accomplished: 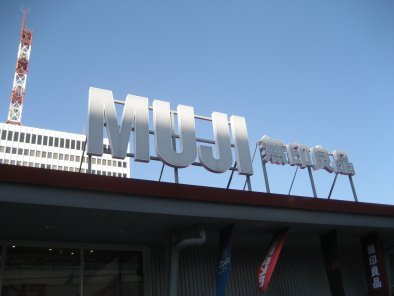 Muji is kind of cool. It's probably most like Ikea (also like Ikea: it has a cafeteria. And like Ikea I got obsessed with it by reputation, the way I romanticize retail and chain restaurants I don't get to see). There's also a touch of, like, what the Gap was doing in the "Basic Pocket T" days. All this vehemently unbranded yet elegantly put-together stuff, it's kind of cool... 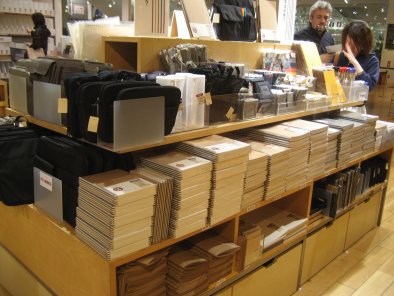 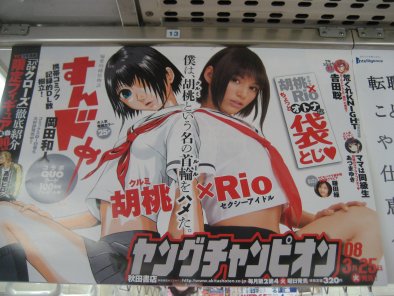 Ah, farewell to the Shim-Matsudo train station. I mean, I guess I'll see it on my way to the airport tomorrow, but still, it won't be the same. 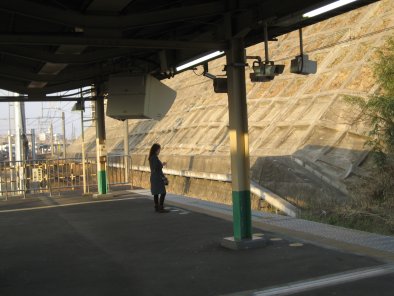 Josh thinks that the Japanese aren't really big into flavors; like at Baskin-Robbins, a majority of people still go for Vanilla... 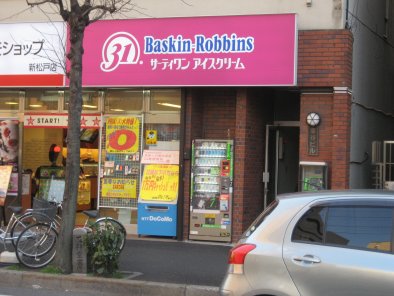 I just enjoyed the name of this breakfast place in Shim-Matsudo.... "Eggs Country!" 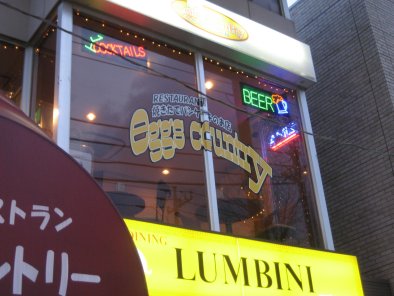 Really random note about Toyota cars here... this is is the Ist, the original of my Scion xA. But instead of a generic maker logo on the front, it's customized for the model... an interesting touch. 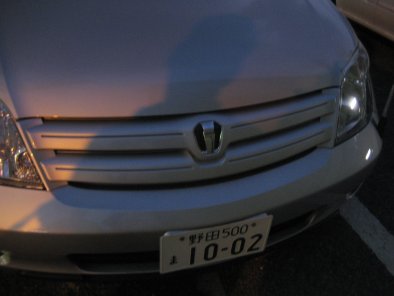 My final dinner in Japan; Pizza Hut! Josh is amused how this place lives up to the Hut-part of the name, just a little shack under the train tracks. 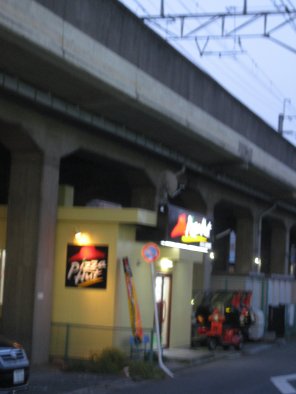 They had delivery scooters. I've seen similar scooters on the road elsewhere; it's crazy watching them take turns, the whole cargo section and seat tilts while the bottom section stays rock steady. 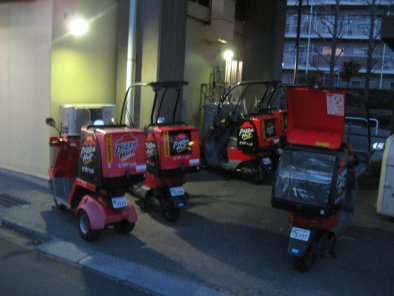 But it wasn't just America pizza.... it was Korean Barbecue Pizza! SO TASTY! 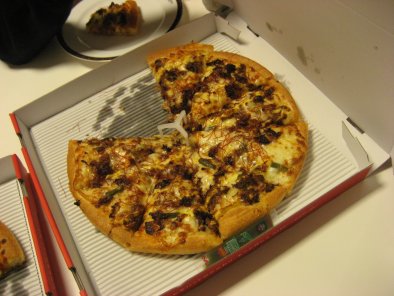 Pizza is pretty expensive here (like, $30 of expensive). So I guess they come up with stuff like this: hey... what if we put a HOTDOG into the crust? Or scratch that...a CHEESE HOTDOG!! But in this I'm afraid that Japan might be only like 4 or 5 minutes into the future and the USA will be hot on its heels. 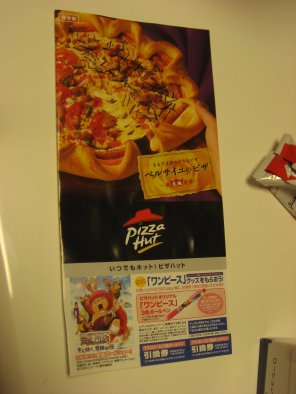 So, this is probably my last daily update for the trip. I'll be doing some wrapup and summary stuff I'm sure, but tomorrow I fly back! I'll miss the place, I've had a great trip and I've enjoyed journaling it here, for folks to see and for my future self.