April 1, 2008
Last night I followed what I think of as a European tradition (though not sure which country I heard of it coming from) of buying dinner for some friends and family. (Summer Shack, primarily a fish place, which helps provide some small piece of justification for today's title.)

A few people have said "dude, isn't that backwards?" but it's a nice thing to be able to do. I figure if I could cook I'd be trying to make dinner for everyone, but as it is right now I'm more deft at making money than I am at making food, so this is the bet I can do.

Kate is making a nifty comic blog with stuff she makes in the program "lineform", she made this about her scooter and my get-together: 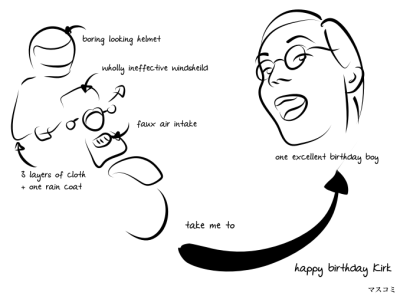 Funny, that's a relatively ancient picture of me she copied from, probably at least 10 years old. Guess I haven't changed all that much, except maybe the glasses.


My wife was watching a re-run of Ellen,
and she had a cooler-scooter.
She kept her pudding in the cooler.

On a politically minded blog run by a friend, baldwintm wrote that, I broke it into bit of verse (very) libre, I just like the rhythm and the slant rhyme.

Link of the Moment
I've seen rather little in terms of April First foolery this year, Slashdot seems to be holding back (which is almost a joke itself, making everyone wait for the other shoe to drop after way over-doing it in previous years), Google has a few clever bits, but I liked World of Warcraft: The Molten Core, a very retro kind of variant of the beloved MMORPG...