So in October of 1999 I got to travel to St. Paul, Minnesota to explain the weird inbred computer language we had recoded the Midwest Surplus Retailers website in.

I'm surprised that my journal indicates it was October, because my strongest memory is how cold it was...bitingly ice cold, but I was grateful for that, because these offices are right across the street from this: 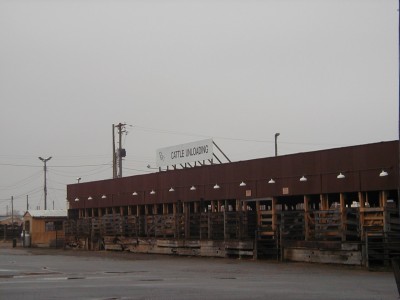 These are stockyards. These are where the cows we eat go to die, and I imagine the smell must be awful in summer. But you know, fine, it's alright, it's not like I'm a vegetarian. But still, this truck... 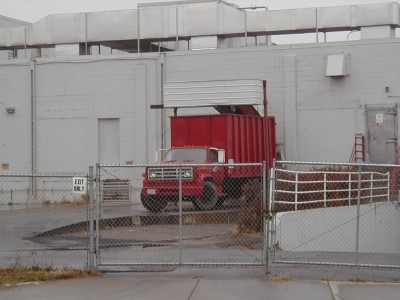 This truck seemed to be permanently stationed there... in fact I think I see it in this Google maps view. The truck is at the end of a raised conveyor belt. All day long former bits of cows go drip, drop, plop into the truck.

So I got the tour of the facility. They had just put in a new automated conveyor/scanning system and my main host (I forget his name, some manager) had come up with the design and implementation and was rightfully proud of it. (Their warehouse with the system still features prominently in their advertising, more on that tomorrow.) I was duly impressed, especially knowing the challenges people on the hardware side of things must face.

But that wasn't my last bit of culture shock. To be fair, I was kind of sheltered, the kid of clergy who had gone to a fancy-ish school in the Northeast and then was on his second white-collar job. Still, the amount of lockdown for the restrooms, along with posted warnings that anyone found writing graffiti there would be fired, was jarring, a reminder of a blue collar way of life I didn't know much about. (This was for the warehouse workers; the big banks of cubbies for the folks handling the calls was its own special kind of sould-draining-ness.) I was also surprised, just based on geography and I guess climate, at how many Latino workers were there, I thought that was something you'd mostly see on the coasts.

The folks whom I was there to train were pretty good guys. It was a bit depressing, just because you could see in their eyes how you didn't have a lot of options when you wanted to do high-tech stuff in that part of the country, but they seemed to be getting by. (This was somewhere in the middle of the dot-com thing, and even though I wasn't (yet) at one of those Aeron chairs kind of places, I could tell I had been relatively spoiled.)

The biggest shock was yet to come: a trip to Executive Country!

Shock #1: the paneling. Again, maybe it was the contrast with Boston corporate land, but seeing all the high muckity-mucks hanging out in what looked like the finished half of your parents' basement was odd.

Shock #2: the President of the company (Gary Olen) was out that day but his office... I think I saw more bear pelts and deer heads in that room than I have since. (At least it hid the paneling.)

Shock #3: the VP who was in, a woman who I guess was head of technology, had a pyramid of cigarette butts on her desk that would have made a crowd of tiny, tiny Egyptian slaves proud.

So, I've already mentioned the "best beer buddy" prose all the catalogs are written in, but the fact is there's something to it, I guess they do a fair amount of product testing there, and I got the impression that hunting trips were kind of a bonding thing for the upper echelons, and to be "one of the boys" this VP had to make a trip. Hence, the deer head on her office wall:

"Yeah, that was the one time I went hunting. But it was a good kill, no kill regret all..."

Yikes! Ok, fine, I eat meat, hunting is a different culture that I can respect, etc etc but... shouldn't, like, the concern about HAVING kill regret act as your little Jimminy Cricket telling you that this is something you shouldn't be doing?

The trip was OK despite the cold. (And I still have a photo of the local bar advertising the weekly "Meat Raffle" - again, there's my over-privileged snarky self being inappropriately amused.) I stayed at a hotel that was a refurbished mini-castle, and got to visit the famous Mall of America and ride a roller coaster inside. I went to Planet Hollywood there (not having enough guts to bring back a business receipt for "Hooters") and passed up the opportunity to buy a Robert Smith jersey (who had been the football star of my high school, but always in Randy Moss' shadow when he played with the Vikings.)

Tomorrow: "no snark regret at all"?

LIKE LINUX, 7ZIP THE FORMAT IS ONLY FREE IF BEING A PAIN IN THE ASS TO YOUR FRIENDS HAS NO COST. (ps i.e. just use ".zip")

our conscius minds may not have free will, but rather "free won't!"

i had "luck be in lady" in my head for a few days. luckily, my interior monologue has a lovely singing voice. musta been a good day of coding; I'm having to unclench my jaw.