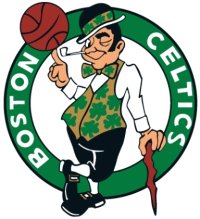 Man, that was AMAZING.

I'm still at risk for being a fair-weather fan, but when the weather is this good, why the hell not?

I know I'm biased, but I think defensive basketball IS more fun to watch, at least for a sophomore-level of fan. A freshman fan just sees the strength and glory of driving to the basket, dunking or getting the layup, or maybe a 3 point shot from downtown, and there might be nuances in setting up an offense to let those glamorous plays happen that I just don't see, but when I see the Celtics defense in action, shifting, rearranging, countering every possible move the Lakers could make before they tried to make it... it's a thing of beauty, like a complex and intricate piece of clockwork that happens to be made of sweaty gangly guys in squeaky shoes.

Of course, that was only the first half of last nights game.. most of the second half was "garbage time", the Lakers running desperate hurry-up plays, trying to recapture some dignity in the final store, and the Celtics mirroring that with fun-to-watch, why-the-hell-not dunks and what not.

Dunno how related it is to being so near the infamous-party/rioters at Northeastern, but the power was out last night and this morning... I loved the commercial, on a few minutes before the end, with Celtics players asking, in effect "come on guys, show some class and don't riot, OK?"

Link of the Moment
The Boston Globe's Scoring Graph and Shot Chart is a nice study in information presentation, the graph is a timeline that lets you see the point differential and the important events throughout the game. The shot chart was a little confusing 'til I read more closely and saw the big dots w/ the player #s were the ones of the crucial second quarter.

Enjoy it Boston! City sports just can't get too many levels better than it has been for most of this decade... they plotted the parade route already.

Heh, first quarter of the Celtics game on the car radio, a convoy of police paddy wagons driving the other way...