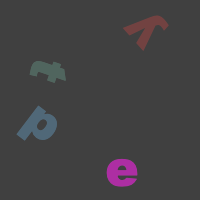 alphaboogie! A program meant to entertain (and tested on!) two year olds... press alphabet keys and the letters fly around the screen (they kind of orbit where you last clicked.) It might take a bit too load, the soundclips make it pretty big. (It's going when the screen turns gray... click and start pressing letters!)

Techincally an entry to the latest Glorious Trainwrecks Klik of the Month Klub, but not very representative of it, in terms of content, the tools I used (well, actually this time had a bigger diversity of platforms than usual) and then actually getting the bulk of it done during the day rather than at the two hour jam.

"Stick It": awesome artsy gymnastics shots (overhead floor routines to kaleidoscopes, multiple uneven bar runs juxtaposed)+good soundtrack I remember feeling a little guilty about picking on the Patriots' defense last week. I take back any taking back I might've done. There's a parallel in my adding small bits to my website and a bird building its nest. The latter is likely more likely to attract females. Aw, crap, that was the equinox? And it's Fall already? Bleh, guess so, http://kirkjerk.com/2007/11/04/