video and ramble of the moment

I encountered this cover in Dance Dance Revolution Max. In fact, it was annoying, because a few years ago I paid import prices for the "DDR Max soundtrack", mostly for this song, and it only had an abbreviated version of this track. I don't think it even made the artist clear, so I couldn't easily seek this longer version. So, youtube for the win.

In general I'll try to pay for a song from Amazon's MP3 feature, but if that fails, I'll rip it myself off of Youtube. And it's surprising how many songs are lurking there... it's kind of a stealth Napster in the works, though I don't know how many people know about it. (And somehow ripping from youtube feels less pirate-y than using BitTorrent.)

So in general, I prefer this kind of cover to the original. For a while I assumed it was because of the "high contrast" electronic beats, but I'm realizing a lot of the covers I like (like that Jan Wayne "Mad World" cover) have a female vocalist, and I guess I prefer listening to women sing over listening to men.

More rambling... I've been trying to isolate and classify the type of beat I like. There might be a parallel to saturation in visual imagery... I like big thumping bassdrums and tight high snares, doing interesting funk-tinged rhythms. Sometimes when I try to pick apart a drumtrack that doesn't interest me, I can hear what a boring, repetitive, acoustic muddle it is.

(Side note: previously I talked about the music service Pandora that uses the Music Genome project, an attempt to classify music on a variety of scales and properties. Wikipedia has a nifty list of Music Genome Project attributes.)

Anyway, I hope I know what I'm talking about with recognizing "highly saturated" images. Like there was this one from a suicide girls set: 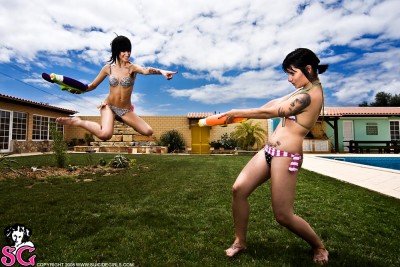 I think that's the quality of image I'm thinking of, those nice intense blues and greens. Can someone confirm that it's "saturation" I'm looking at here?

You know, last night's energy boost might have been rooted in listening to loudish music I like in the car. Self-medicating with MP3s? Do you think Lisa Loeb thinks that in a better world she'd be a romantic interest for Superman? Helped a friend move. I have a strange affinity for landings at the top or middle of stairs; lying back on the landing, feet over the stairs