because what you really wanted to see today was a photo of my bathroom walls, right? 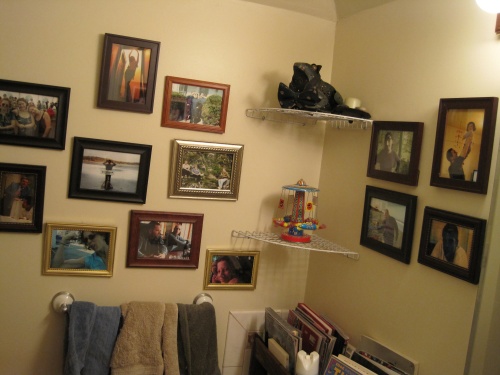 My latest apartment project! Still potentially a work-in-progress, but also at a point where I could leave off for a while and be happy with how it looks and whom it reminds me of.

I meant it to be chaotic but it turned into a big letter Q, with my dad on thin ice at the center, FoSO as the tail of the Q, then clockwise from top it's Ksenia on the stairs, me with EB+EBSO in our worker outfits, my Aunt, Mom, and Uncle perched on Irish rocks, my buddy Mike and a pal of his, having beers in the afternoon on their roadtrip to Boston, Jane making a muscle, Professor Couch from Tufts, and Mo, Veronika, and V's friend B in line at the Statue of Liberty. On the facing wall, clockwise from top-left it's Sarah in Groucho glasses, Josh raising Erin, JZ imitating Blue Man, and Mr. Ibis contemplating a coconut.

Unshown here are a few more photos, a family photo from when I was may 10 or so (with my folks in Salvation Army uniform), a Prom photo that I cherish in large part because the background was made of extra of the material used to make my date's dress, and then a semi-diptych of diploma-accepting photos, my mom with her masters and me at the end of high school (my Aunt assembled that and had it down here in what was her workspace.)

The photos are meant to be chosen for visual appeal as well as emotional value to me. There were a few people I just don't have interesting photos of, and now I need to buy more frames. (Mostly these are $2 wonders from Family Dollar.)

Inspired a bit by Henry Miller's bathroom, though I kept it more friends-and-family-ish.

If nothing else, the bathroom is a lot less bare now!

When you think about it, the whole process is rather strange: Northern Europeans and some sub-Saharan Africans have become "mampires," mutants that live off the milk of another species.

Anyone who says Dustin Pedroia wouldn't be even cooler with a jetpack and sixteen-foot metal claws is just lying.

Rules for Programmers: Every class need a comment. Any time you do something in a complex way when there's an obvious simple or hardcoded way: EXPLAIN WHY. notepad++ seems like a good editor. Using Firefox has made me appreciate a IDE-ish "restore open docs", tho I guess textpad coulda done it.