elvii and the rock of boston 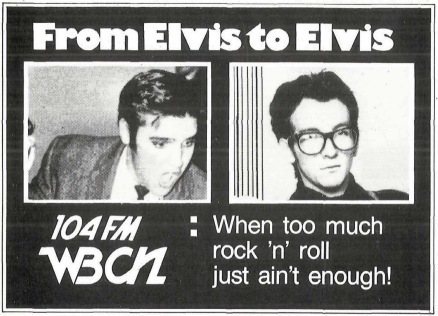 A note of passing: WBCN is going away. I wasn't here in Boston early enough, or generally cool enough, to really get some of its big milestones, or how it will be missed. Post-divorce, I found Howard Stern in the morning weirdly cathartic, and then it always seemed strange to be the place to go for Patriots radio broadcasts...

Anyway, I've recently had my interest reawakened in the cartoonist Shary Flenniken, especially her Trots and Bonnie, and its fun kind of Little-Nemo-in-Slumberland-tinged sexiness. This caused me to try emailing her, and we've corresponded a little.

(A lovely mild thrill when an artist you've seen in mainstream, non-virtual publications turns out to be accessible via e-mail and happy to chat a bit! It reminds me of my dad's scheme to send self-addressed postcards to authors asking whether they sign and send back their own works mailed to them... the trick with the postcard was, very often he'd get at least a signature on the card, even if they declined to autograph the work.)

She mentioned a DVD with medium-quality scans of all the National Lampoon issues, so I ordered that, in part to see her work, and in part to see if I could find an issue I remember finding semi-stashed away by my dad... (Turns out it was the December 1982 issue. I was probably attracted by the big ET lampoon on the cover, but it was the mildly lascivious (you know what? Livacious should TOTALLY be a word) pseudo-centerfold of Mrs. Clause reclining in front of horny elves (as Santa was making his rounds) that has stuck in my mind 26 years later.)

Anyway, this advertisement is from the December 1980 issue of National Lampoon. (I'm not sure if it was a localized ad or if it appeared nationwide.) Reading the old magazines is weird, the mix of cigarette, booze, stereo, and cologne ads is so different from today's world that sometimes I'm not sure which ads were real and which were the parodies. (Plus that mention that 70s habit of ads with big paragraphs of text. I kind of like that, actually. I think the style lasted longer in the UK.)

In the context of science, nouns are just exceptionally slow verbs.

http://dutycyclegenerator.com/ - Neil Baldwin made music for the NES in the 80s and 90s, he talks about the process, and there are little widgets to hear the songs he made. http://www.adn.com/2835/story/864687.html -huge mystery blob in Alask. Are these the oiliens from x-files? "What was left of a dead goose -- just bones and feathers"

INTERVIEWER: How intelligent are dinosaurs?
DINOSAUR RACER 2: We're probably not going to win any prizes, but if you think about it, neither are you.