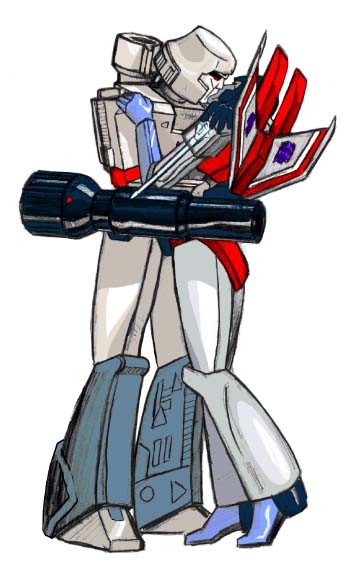 --from something I posted years ago, Razermoon's DECEPTICONSORT, a site of naughty Transformers fan art.

I don't know if this is supposed to be Megatron and a feminized Starscream (which given the kind of gay-subtext top/bottom relationship they seem to have in the cartoon is kind of funny) or "Star Ruby", one of the fan-created female Decepticons.

Skateboarding, first known as 'sidewalk surfing', split off from surfing when people decided it would be much more fun if you lost a layer of skin and a joint every time you screwed up. Or at least, it would be more fun if all the newbies did that instead of clogging up the beach. This means skateboarders were outwitted by surfer dudes, a feat thought medically impossible by anyone still breathing.