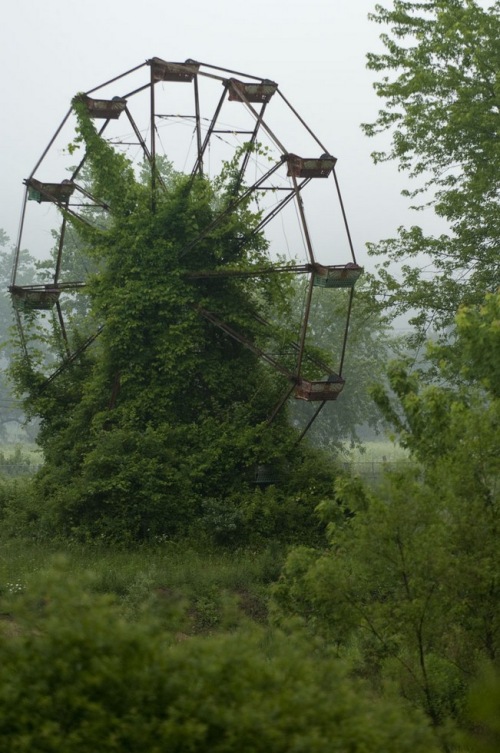 I found this arresting image online somewhere and I just had to save it. It captures so many facets of existence in one image. Overall, it has a very Wabi-sabi (侘寂) feel, which is an aesthetic I'm particularly drawn to -- impermanence, natural decay, the sorrow of the ephemeral. At the same time as this photo is pointing helplessly at sun-faded childhood dreams, it also affirms the power of nature to triumph over the works of man. And that, in the end, is a comforting thought. Not only for the health of the planet, but for the health of my soul. My impermanence is part of the natural order, and my own passing, and the passing of things that I love, is not to be mourned.

Fantastic thought, it really gave me pause. I'm not intuitively drawn to nature enough to have previously thought of the possibility of applying a satisfaction with the impermanence of all things to humanity in general, even though I'm a bit down on our long term chances. And by down, I kind of mean for the interesting idea of civilization that I so cherish, rather than our species as a whole. Or even an idea like "mammals". A woman on the subway had a "Piggly Wiggly" plastic bag. Odd, probably aren't any around here. In fact once I iPhoned Amber noted that the list of states with Piggly Wigglys has a near 1-to-1 correspodence with her mental list of states she doesn't want to live.