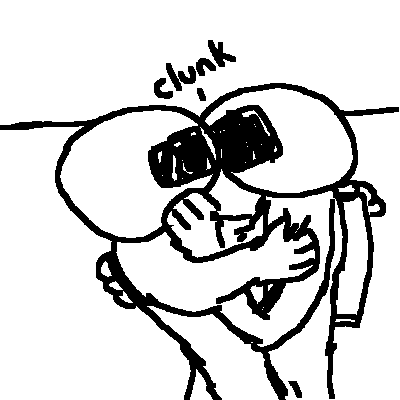 The images are black and white, and I wasn't sure if I'd have time to go back and color everything, so I worked to make leaner Lydia visually distinct and more feminine than more stocky Jake. (Which is kind of funny, part of the joke of the original 1 panel cartoon is that you have little idea about gender or personalities of astronauts involved.) In some ways, the color limitation let me give the holograms and Anomaly appearance a bit more visual kick, flashes of blue and green when everything else is strictly monochrome, and thus adding to a sense of "beyond normal physics". Also the panels are the size I sketched at, 400x400 instead of the 200x200 I used in the final version, and I find it kind of interesting how it feels more like a storybook.

Two New Bonus Panels at the bottom, too...

http://www.slate.com/id/2147309/nav/tap1/ - excerpt from the illustrated 9/11 report http://www.slate.com/id/2227871/ - I mentioned before: "BigBelly" is the evolutionary ancestor of Wall*E http://www.utne.com/Politics/How-911-Should-Be-Remembered-5279.aspx - a leftish reminder of the stoicism and bravery of ordinary people on 9/11. So weird it got co-opted to justify Iraq. Boston Sports Radio is generally on AM, except new 98.5. Does iPod nano having FM radio only mean thats the way the tech is going? I'm pro-Obama, but it's vaguely odd that his "It is a lie, plain and simple" is fine, but "You lie!" is a firestorm. Decorum uber alles! http://www.offworld.com/2009/09/one-shot-3d-tetris.html - mad at your eyes? Punish them with Stereogram Tetris! http://www.npr.org/templates/story/story.php?storyId=112564382 - habit forming heartburn meds? - remember kids, pick FUN addictions! Some friends of mine are experiencing first hand employment problems because of credit checks. What the HELL is the justification for those?