cool
October 7, 2009
Before my trip to Portugal Amber and I played a round of Mr. Snowman at the Summer Shack near Alewife. While not as epic as the round with Miller, Kate and Tammy (I think crayons make it a bit tougher, plus it might be better as a four player game) Amber (on the offense) did quite well... 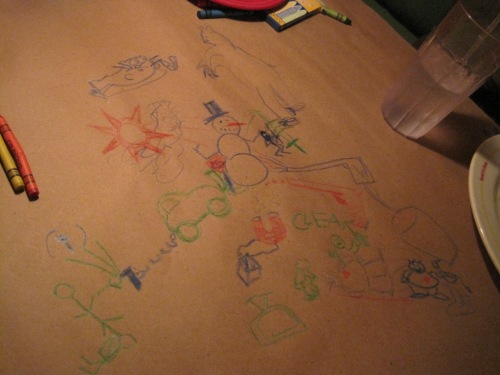 Clockwise from top we have her attacking polar bear being distracted by my delicous baby seal, her lead off sword being deflected by a cunning ninja, a water gun with the attached tank of water - that's being drained by a fat man out for tea. However, that fat man had a dodgy heart and thus the Mr. Snowman was again imperiled... until the paramedics from the 70s show "Emergency!" showed up to resuscitate him ("CLEAR!"). A more traditional gun had its bullets diverted via a powerful electromagnet. Then, we have a plow truck being stopped by a stake in the ground and chain. I'm not sure what the gentleman is doing to lift up the stake, but he (and his curious- err, tripod base-) is being...umm, licked by another guy as yet another distraction. Finally, we end with what was probably chronologically the first, the melting sun being blocked by clouds.

The weird thing is, they've managed to, in effect, put this game into videogame form. There's this AMAZING game for the Nintendo DS called Scribblenauts, with a vocabulary of over 20,000 nouns. Type in any of those nouns, and it magically appears, and can then be used to help solve various puzzles like escaping from zombies, knocking over bottles, or keeping food from ants without killing them (lest you upset the hippy).

Never thought there would be handheld technology to do that in a game!

Going back to more primitive toys, I rather liked Amber's little house made out of an obscure, flinty building toy called "keystones"... 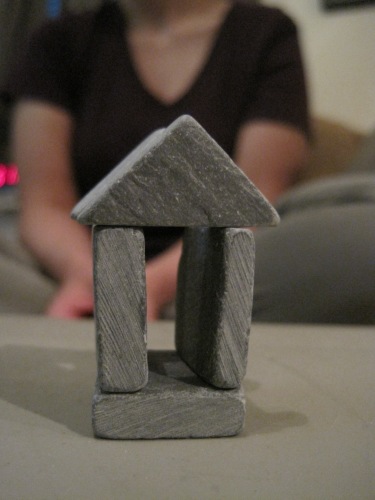 One of the nice things about 24 Hour Comics Day is I often hear a bit of new (to me) music. Bummed this song isn't embeddable: https://www.youtube.com/watch?v=gw9wE1nutc4

I think Pooh and Gopher are the only straight ones in The Hundred Acre Wood.