a decade of writing down the stuff i was watching

media
January 2, 2010
So for a decade now I've been keeping a database of the media I've been consuming!

Last year I mentioned I wanted to graph this stuff out, and so here it is: 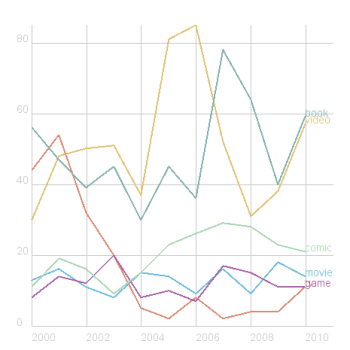 (adding to the geekery, this is a screenshot from a homemade java processing program, not an Excel thing like a sane nerd might've done.)

As I predicted my commute change led to a decrease in books read, though I didn't know that was a trend. I'm surprised to see that I haven't, in fact, been playing as far fewer video games through as I had thought. I think the early 2000s amount of movies-on-tv was from having a tv in my home office and the mid-2000s spike in videos was the discovery of Netflix.

I also made a permanent features page for this stuff, with links to all the previous years.

I always feel he need to apologize for this, and I'm not sure if anyone reads my recommendations all that closely. Still, if nothing else these are notes to my future self, who I hope will always be at least a little bit interested.

Watchmen was a solid translation of the comic, and I liked the change they made to the ending. I was delighted to see the return of Kirk as the pre-eminent Captain with Star Trek. Up was beautiful and touching. IMAX Transformers 2 made it just a terrific spectacle, and if you take it for what it was it was pretty great. Funny People and Whatever Works were both kind of sweet-nature comedies. I love the way Where the Wild Things Are didn' try to prefectly map the realm with the monsters to their parallels in the "real world". Finally Avatar was stupendous, especially in IMAX 3D.

I got the chance to revisit a lot of favorite videos with JZ and Amber. Vicky Cristina Barcelona was new to me, but, you know, it's still Woody Allen. Shaun of the Dead is still my favorite Zombie flick. Better than Chocolate is still a great and sexy without being tawdry young lesbians in love flick. Everyone needs to see Blues Brothers. I watched Burn After Reading and In Bruges with cmg, and both were funny but dark. The Big Lebowski, American Beauty, Rosencrantz + Guldernstern are Dead are all classics. As is Henry and June, and I'm still irritated NC-17 isn't a legitimate film category or movie makers. Pushing Tin is fun. Ponyo had a Disney release but we caught it on bootleg. I'm not sure how I missed The Butterfly Effect - maybe I was scared of Ashton Kutcher, but it's really a thoughtful sci-fi piece. (500) Days of Summer was romantic and lovely. Stick It and Drumline are two great teens-over-adversary montge flicks with great visual moments. Robocop is Robocop. Chasing Amy is Chasing Amy - a bit awkward but still nifty. Across the Universe is a lovely rework of so many Beatles pieces, and Backbeat is their story in Hamburg - very sweet and romantic. Finally Kama Sutra is not as sex-crazed as you might hope, but it's a simple story well-told.

Wizard of Oz is great, if sleepy. Amber and I watched through all five hours of VH1's 100 Greatest Hip-Hop Songs and it was pretty cool, even if some of the choices are baffling, and man... does TV really need that many reality shows with washed up hiphop performers?

Books (40)
The Life and Times of the Thunderbolt Kid, Uniforms, Inventing Modern, Like You'd Understand, Anyway, Magic for Beginners, Battle Stations, The Shangri-La Diet, Effective Java, Sum: Forty Tales from the Afterlives, Racing the Beam, Holy Cow: an Indian Adveture, The 10,000 Year Explosion, Diary of Indignities, The Great Fires, The Book of Totally Useless Information, Old Age Comes at a Bad Time, (book of George Washington selected letters), Lamb: The Gospel According to Biff, Christ's Childhood Pal, The Love Poems of James Laughlin, Amerika: Russian Writers view the United States, Me and You, His Excellency George Washington, A Home at the End of the World, Everything is Illuminated, Going Postal, The Adventure Capitalist, He's Just Not That Into You, Interpreter of Maladies, The Photograph as Contemporary Art, And Another Thing*, A Catalogue of Unfindable Objects, The Case for God*, You Better Not Cry*, 9 Stories, 1,001 Things They Won't Tell You, Word Myths, Nothing to be Frightened Of, Ounce, Dice, Trice, Stop Me If You've Heard This: A History and Philosophy of Jokes, Franny and Zooey * (audiobook)

The Life and Times of the Thunderbolt Kid - nostalgic but not sickly sweet look back to the 50s. Uniforms was a surprisingly cool read, though the author was a bit of an elitest. Like You'd Understand, Anyway were some brilliant and well-searched short pieces on people surviving extremely difficult circumstances. The Shangri-La Diet has an awesome idea thouh I'm not proof positive it works. Effective Java should be read by every Java programmers. Sum: Forty Tales from the Afterlives was like "Einstein Dreams" but about various incarnations of the afterlife and God. Racing the Beam was a cool in-depth look into programming for the Atari 2600. Holy Cow: an Indian Adveture showed me just what amazing diversity India sports. The Great Fires is the best book of romantic poetry ever. Lamb: The Gospel According to Biff, Christ's Childhood Pal was like a funny and pop-culture remake of the Last Temptation of Christ. Me and You is a superbly sensual story I first read in college. His Excellency George Washington pointed out what a toweing figure this guy was. A Home at the End of the World made me wonder why all books can't be this sensual. Everything is Illuminated is also good as a movie. And Another Thing was a worthy Hitchhiker's Guide sequel. A Catalogue of Unfindable Objects was referenced in "The Design of Everyday Things" and is a brilliant bit of design fantasy and social commentary, though a bit French. The Case for God was a profound survey of religion, and makes me wonder if people really were that good at seperating the "mythos" from the "logos". You Better Not Cry was classic Augusten Burroughs but hearing him read his own stuff was terrible until I listened to it at double speed. Nothing to be Frightened Of is an interesting musing on mortality. Ounce, Dice, Trice is a fun kid-friendly book about words, meant to be read aloud. Stop Me If You've Heard This: A History and Philosophy of Jokes had some neat thoughts about the attempt to capture humor in writing. Franny and Zooey told me that I was wrong to dislike Salinger so immensly after "Catcher in the Rye".

Secret Identity started kind of corny but turned into a decent Superman tale. I loved the insanity of Emperor Joker Help is on the Way is a compilation of the web comic "Basic Instructions". I reread The Watchmen in preperation for the movie, and I thought the movie held up. Funny Misshapen Body might be Jeffrey Brown's most informative work. Blankets is a great graphic novel, sweet, romantic, a great study into growing up among bible thumpers - Amber's first Pekar remains strong in Another Dollar, 32 Stories is Optic Nerve. The Man Who Loved Breasts is funny, and Will You Still Love Me If I Wet the Bed? is the sweetest thing ever. Empowered 1-5 are these really weird mashups of superhero and B+D comics - light hearted and not TOO too porny for all of that. What it Feels Like to be a Building is just a neat book about the pressures walls and ceilings face every day.

Guess I still love me some EDF 2017, maybe the best B-movie game ever, and hecka fun for two people. Gears of War is still a definitive classic. Transformers 2: Rise of the Fallen is a competent little reward-driven shooter. Portal is of course brilliant. Flower is poetic and beautiful, and GTA4: The Ballad of Gay Tony is probably the ulitmate little GTA4 game, with mission select, a tank, and skydiving.

Overall I'm a little sad I'm not playing more games. I got into but didn't finish Retro Challenge, Scribblenauts, and GTA: Chinatown Wars. on DS -- I guess I don't find it the most compelling system.

I also saw the stage show "The Buddha In His Own Words" which was pretty decent.