photosgifs
(2 comments)
January 9, 2010
Last week I saw a commercial that reminded me... I always kind of wanted to see a Monster Truck rally thing. It is a testament to Amber that she was willing to go along. (Actually she ended up kind of liking it as well.)

It was a small arena as these things go... so it was LOUD. People who knew what they were doing were packing earplugs. (It was a small arena, though also not such a packed house, not sure if today's show will have better attendance.)

Here are the trucks in their usual "ready to go" formation. 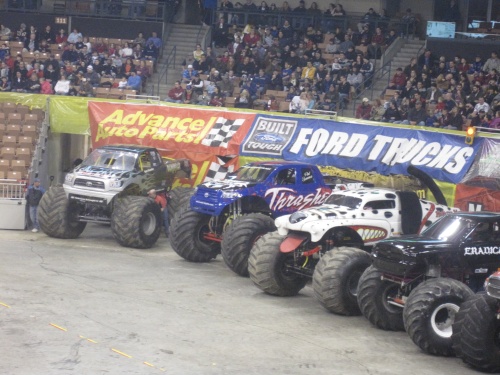 The first part was the races. 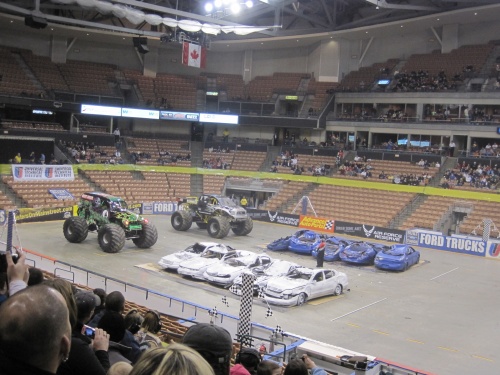 It's... I dunno, kind of like Pro-Wrestling? This kind of weird, powerful, over-macho event with moments of surprising balletic grace... each race is over in a flash, though. 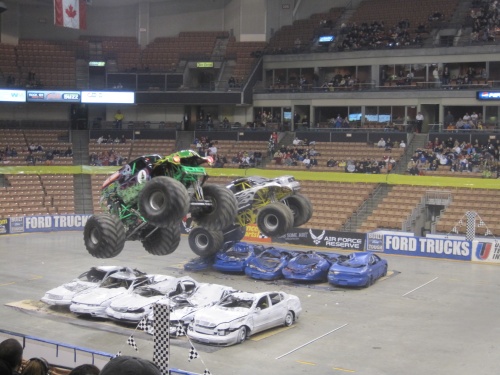 Besides Grave Digger in that last one (who seems to be a bit of an institution in and of itself), "Monster Mutt Dalmatian" was the big crowd favorite, in part because of its wagging tongue, which was way cute. 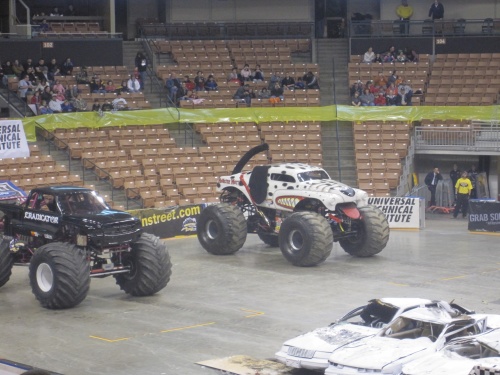 Dalmatian was driven by Candice Jolly, so it was kind of neat to see women getting on this. 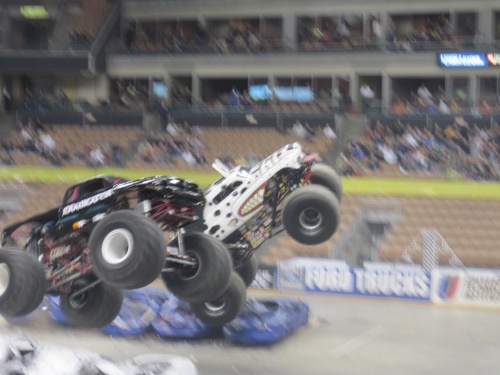 So, Megasaurus was this funny squarish vehicle on tank treads that trundled out...(while a surprisingly detailed backstory is laid out) 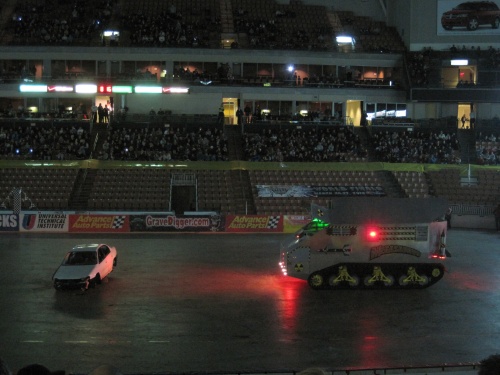 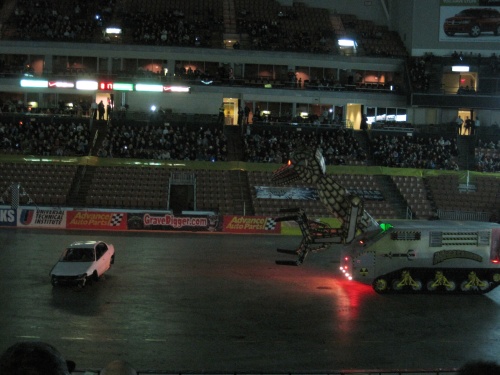 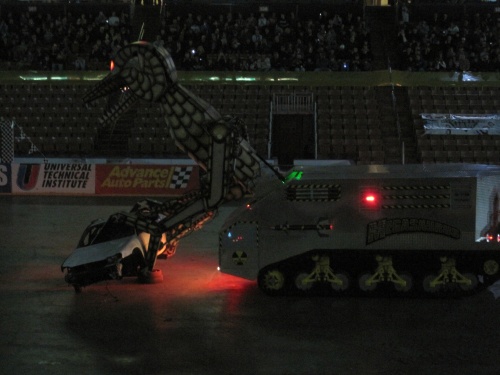 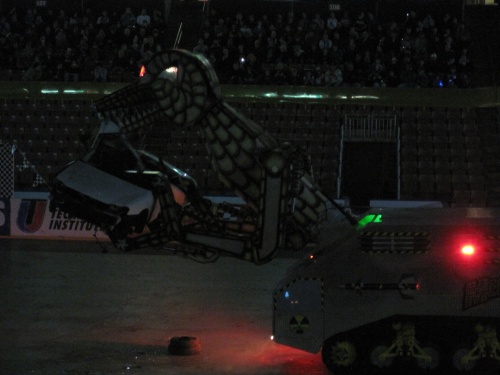 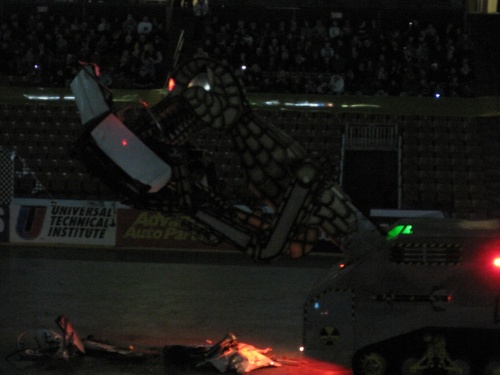 *erp* (the flamethrower was a nice touch throughout.) 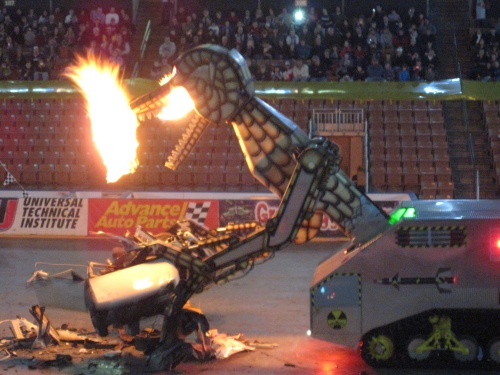 Coming over to say hi to the crowd... Here I started thinking about what kind of insurance these guys must have, and hoping that the "flame thrower" button was, like, very well marked. 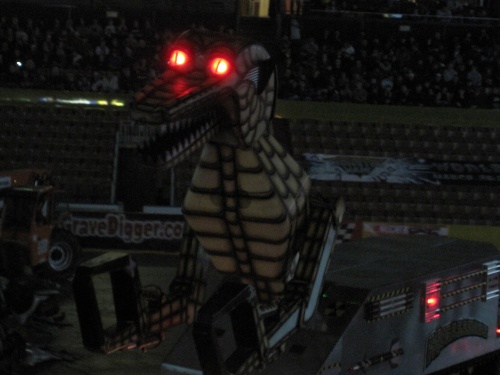 You know, I thought it was more of a dragon than a dinosaur, but I wasn't about to press the issue... 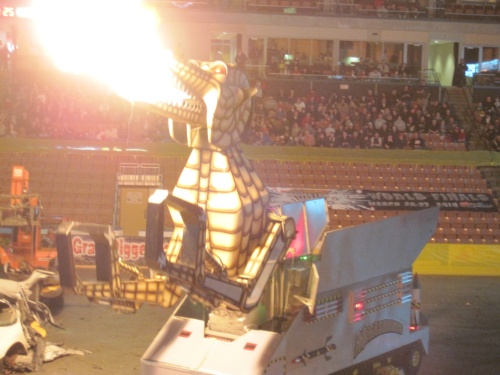 OK, adolescent humor footnote -- there was a woman who was kind of the ringmaster for the thing, who would emcee and also a rodeo clown-type fella (no makeup, though a Mike Meyers mask at one point) who was a very good dancer, rode a weird modified chopper bike, and could throw a rolled up T-shirt WAY up into the high seats) They would try to keep the crowd engaged during down times. Anyway, it was hard to make out what she was saying sometimes, except the phrase "UTI" kept jumping out at us... 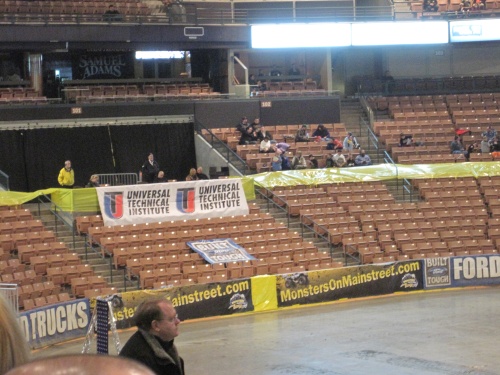 So there were 4 main events: the races, doing donuts, megasaurus, and then a fresstyle. Eradicator dominated the donuts, and there were a lot of those in his freestyle bit:

(I also made a tiny small gif cinema version)

Anyway, a fun event in all. Our sectionmates were some interesting folks (though, jeez, some people really shouldn't be wearing thong undiess... but I liked the biker-lookin' fella with beard next to me, especially when he put on one of those grave digger hats that's a model of the famous truck) and it was just neat to see big loud machines do their thing.

Don't worry about avoiding temptation--as you grow older, it starts avoiding you.

Sucking it up and reading the damn XSL book. Man, structured data wonks are such lousy salesmen, it makes me argumentative and wanting to point out the straw men. Mostly, it's the ivory tower negatavism about pragmatic technologies; I hate screeds that ignore positives or influencing factors of things they don't like. All these tax prep software sellers "FREE! (Federal Edition)" - talk about giving away the razors (except for maybe those 8 states w/o tax)