the traffic island of misfit umbrellas 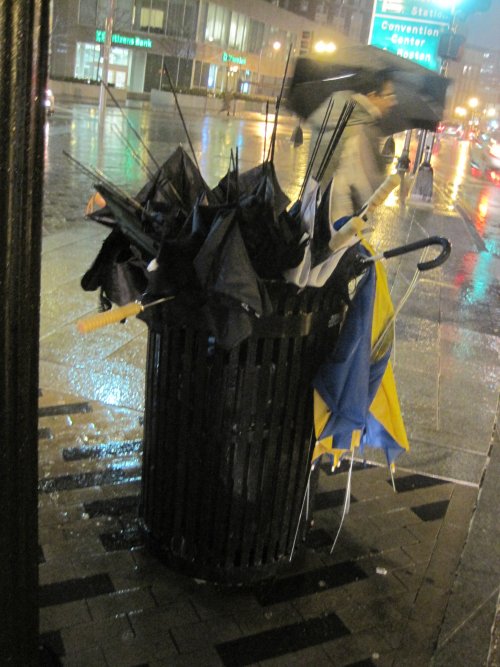 --Yesterday near South Station there was the saddest/funniest accumulation of broken umbrellas I've seen... Rode in the front of the first car of the Red Line this morning. Always fun to be able to look down the tunnel, see the island of light each stop becomes. http://tiltshiftmaker.com/ - if you have some nice urban landscape or otherwise photos about, tiltshiftmaker is pretty awesome. http://daringfireball.net/2010/01/the_original_tablet - on the verge of The Tablet, pondering the hubristic glory of the Apple New Newton (and why Palm ate its lunch) Thinking of the value of the Newton makes me try to remember - what'd I like PCs for, pre-'Net? Games, Word Processing, Mouse Doodling... I wonder if the inventor of the Snuggie uses one, or was just great at thinking up a niche, possibly full of cynicism about couch-potatoes. http://obliquelyreferential.blogspot.com/2010/01/braid-contemptuous-hair.html - about the bad writing of the brilliant game BRAID. I see what he means about the writing itself, but some of the images presented, the theme of romantic regret, were lovely, and I love the line:

Off in the distance, Tim saw a castle where the flags flutter even when the wind has expired, and the bread in the kitchen is always warm. A little bit of magic.

Possibly I'm guilty of wanting it to be better than it actually is. Anyone get that feeling of reading something they wrote long ago - old email, old Usenet posts, old letters - and having no memory of having written it whatsoever? Like, you have to take something else's word for it that it was by you! How do you know that was really you? In some non-trivial sense, maybe it's not?

A knack at living in the moment can sometimes bring with it a feeling of disconnection from your future and past self...