church of many colors 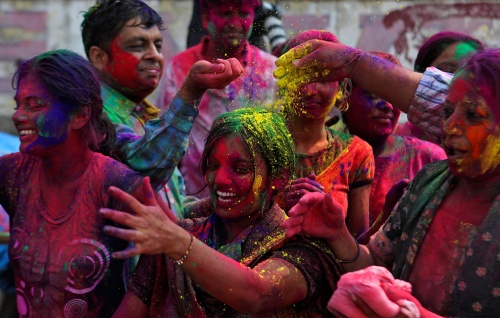 Kjersten pointed me to a great set of photos from Boston.com's "Big Picture" who provided this explanation:

Last Monday (March 1st), people in India and other countries with large Hindu populations celebrated Holi, the Festival of Colors. A welcoming of Spring, Holi is celebrated as the triumph of good over evil. Hindu devotees and others enthusiastically drop their inhibitions, and chase each other in temples and through the streets, playfully splashing colorful paint, powder and water on each other. People also attend bonfires to commemorate the story of Prahlada, a Hindu figure and devout follower of Lord Vishnu who prevailed over his father and the demoness Holika with the power of his devotion.

It got me thinking about the UU church I go to - I went to the Sunday service for the first time in a long while, mostly because my Covenant Group had volunteered to do the snacks for the post-service coffee hour. The day before I had been explaining the church's "liberal" (mostly in the accepting and pluralist sense, but also the political) religious ideal to my friend Lena, and she asked about the symbols they used... well, I was able to take a photo of a banner with the whole smorgasbord... 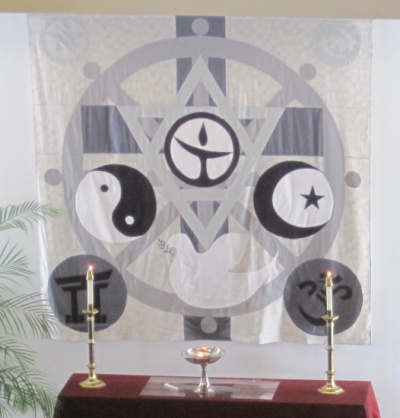 Yow! Besides the traditional UU flaming chalice in the center, there's a Christian Cross, Jewish Star-of-David, Buddhist 8-spoked-wheel, Taoist Yin-Yang, Islamic Crescent, Shinto Torii Gate, and a few others, including a Wiccan pentagram. Aesthetically such inclusiveness is a bit of a mishmash I'm afraid, but still, it speaks to to the UU sense of respect for each other's journeys and the broad palette of human religious experience.

That's kind of the thing about the liberal religious tradition. The various flaovors of Fundamentalists can't all be right! But they're probably not all wrong, either. Like I quoted my fellow group member John a while back:

"You don't have to have a particular belief to go to the UU church.."
"Well what do you all believe in, then?"
"Well, we believe in going to church."

Anyway, I also like my church's Earth, Air, Fire, Water set of banners: 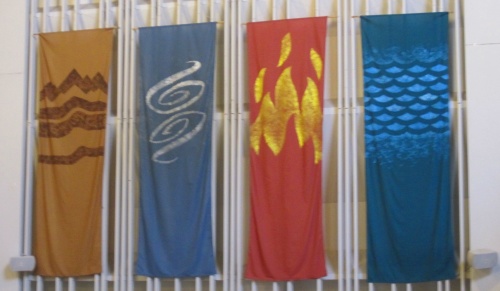 From a design standpoint those are pretty awesome. So the UU church can be pretty colorful, and I'm not even including one of the other design motifs, use of the rainbow (there's a set of tile plates on an outside wall, and some new quilt-looking wall hangings in the rec room) signifyin the gay-friendly "Welcoming Congregation" nature of the place.

Still, it would be cool if they had their own Holi celebration...

I was explaining "Bcc" to a friend, and was struck by how funny it is that we call it "Carbon Copy" in the first place- typewriters ahoy! OMG THEY PASSED HEALTH CARE REFORM AND THE STOCK MARKET TOTALLY CRASHED THE NEXT DA- oh wait. Huh.

The universe is like a safe to which there is a combination--but the combination is locked up in the safe.