the nothing box, the nowhere man 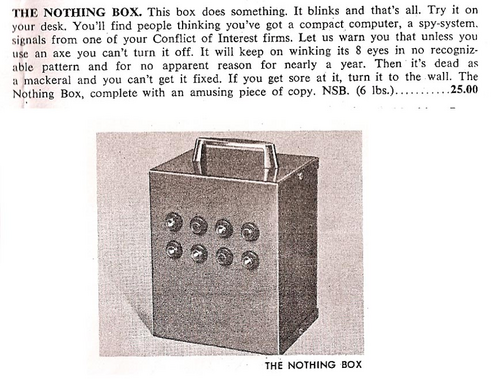 --on a bit of a Beatles kick, triggedered by reading "100 Best Beatles Songs: An Informed Fan's Guide". Went on a bit of a wikikick (what's the word for that, when you just start following links? Surfing? More networked than that though...) freading about Cynthia Lennon having an affair with "Magic Alex". I was intrigued by his "Nothing Box" (partially 'cause of the name), something that John Lennon is said to liked staring at while tripping... this advert for it and a picture of Lennon with it from Lennon's Sunroom. (I'm kind of conceptually interested in the Indica Gallery where Magic Alex showed some of his kinetic lightwork and also where Lennon met Yoko Ono... One MAD parody, "G.I. Shmoe" - repeated gag was a woman asking "HEY JOE- YOU GOT CHEWING GUM?" Guess it was a pickup-line, not sure what era though. Yay to 10-1 Design and their iPad/iPhone Pogo sketch stylus- mine got a broken clip, I emailed, they said there had been a bad production run and sent a replacement.

It occurs to me that the App Store's restrictions and control are to this coming mobile era what Windows's inferior user interface was to the PC era: something that offends some critics to a degree such that they will insist for years, despite the success and popularity of the platform, that it's a fatal flaw that will ultimately doom it.