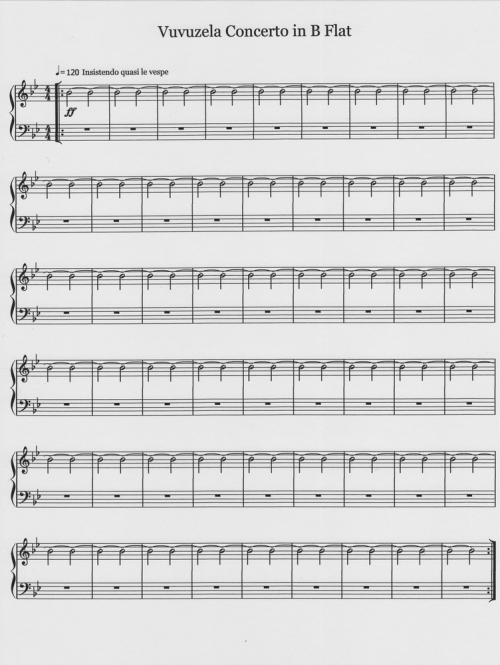 --via. So Vuvuzela jokes are really running their course, but "Insistendo quasi le vespe" (roughly "insistently, like a wasp") is a nice touch. I kind of forgot how sheet music tended to have stuff in Italian on it, which seems quaint now. (And I think English instructions are becoming more common.) Feel somehow validated that the default iOS 4 background is the same one I picked for iPad. BTW, thanks for the 1AM "Welcome to AT&T!" text, assholes. #att #attsucks #attfail

Did not get an iPhone today. Just drew a 4 on my old one with a Sharpie. Felt better.

CNN headlines, mildly disappointing: "iPhone 4 spurs excitement, beefs" I was kind of hoping the story would be more meat-related.

iPhone, iPad, no Macs -- I'd like to think that I'm less of a "Apple Fanboi" and more of a "Touchscreen Junkie".

If a June night could talk, it would probably boast that it invented romance.