iPad of the Tiger

--All-iPad Music! I'm keeping my eyes open for the equivalent of GarageBand for the iPad; maybe then I can meet my "self-appointed goal for my 30s" of getting electronicified versions of all the basslines and riffs I was working with in high school. FUN FACT: Space-sickness is measured in "garns", a unit named for Rep. senator Jake Garn, who politicked his way to a space trip and upchucked like mad... heh, Pam's purple/green shimmerchange dress at Office Season 2-3 cliffhanger is what M. had at EHS Spring Fling '92- so nostalgic for me, it was such a gorgeous dress... Forget iPhone antennagate and the "grip of death"-hold ANY iPhone "wrong" for a game and you totally block the sound. #speakergate #whatevs

Insects' mouth parts are modified legs. A similar process may have given us our language of thought.

Osmos (for iOS, PC, Mac, Linux) is amazing; elegant physics (including emergent intuitive orbit mechanics) and a solid "eat or be eaten" mechanic... the "Rich Get Richer, Poor Get Poorer" idea of the latter is interesting, I remember a fellow A-life student in college who was playing with a more linear version of that... never thought of its game potential until Osmos added a "burn mass for thrust" aspect. 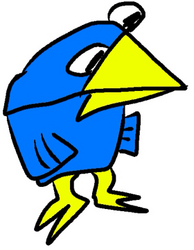 http://gizmodo.com/5613877/worlds-laziest-adventurer-traveling-length-of-britain-via-street-view - point and click tourism! http://www.1up.com/do/blogEntry?bId=9039615 - crap, I can't believe I fell for that Back to the Future thing and missed Bionic Commando Day