We normally characterize an optimist as someone who sees his glass as being half full rather than half empty. For a Stoic, though, this degree of optimism would only be a starting point. After expressing his appreciation that his glass is half full rather than being completely empty, he will go on to express his delight in even having a glass: It could, after all, have been broken or stolen. And if he is atop his Stoic game, he might go on to comment about what an astonishing thing glass vessels are: They are cheap and fairly durable, impart no taste to what we put in them, and-- miracle of miracles!-- allow us to see what they contain. This might sound a bit silly, but to someone who has not lost his capacity for joy, the world is a wonderful place. To such a person, glasses are amazing; to everyone else, a glass is just a glass, and it is half empty to boot.

Bill the Splut linked to the first of 3 Essays on BoingBoing by Irvine (listed in reverse order, there) and mentioned he thought he might be a natural stoic.

The first order of business is to realize that the English word "Stoic", in terms of being emotionless, is pretty far afield from the ancient Greek school and practice. It does have elements of seeking tranquility via detachment similar to Buddhism, but without Buddhism's insistence on detaching from positive and joyous feelings as well.

I'd say many parts of Irvine's modernization of Classical Stoicism (a supremacy of rationality, seeking of tranquility, strong appreciation for simple pleasures while not being utterly dismissive of the possibilities of finer ones, seeking to triage parts of the world into things we have total control over, partial control over, and no control over and only attending to the first two categories) hit home for me, but I disliked a bit of arrogance in it (it seems to insist on supreme confidence in ones own opinions, something I find impossible given my temperament in this postmodern world) and says nothing about the need for compassion or empathy. I would sincerely like an app that graphed how much money I've spent on apps. 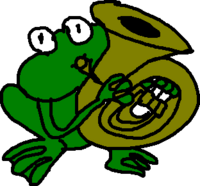 (made on my new Mac using my iPad as a ghetto Cintiq via "Air Display") - I've drawn many frogs, and many tubas, but maybe not a frog playing a tuba.
Hollywood's Awesomest Car Lot