what i need is a robot pet

December 9, 2010
cmg pointed out the site WishbookWeb -- very nostalgic! I can't even say how these two pages of robots from the Sears 1986 Catalog influenced my thinking and drawing back in the day-- 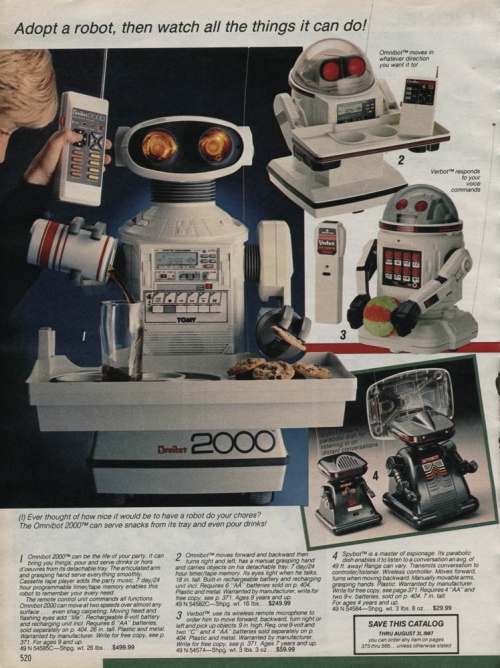 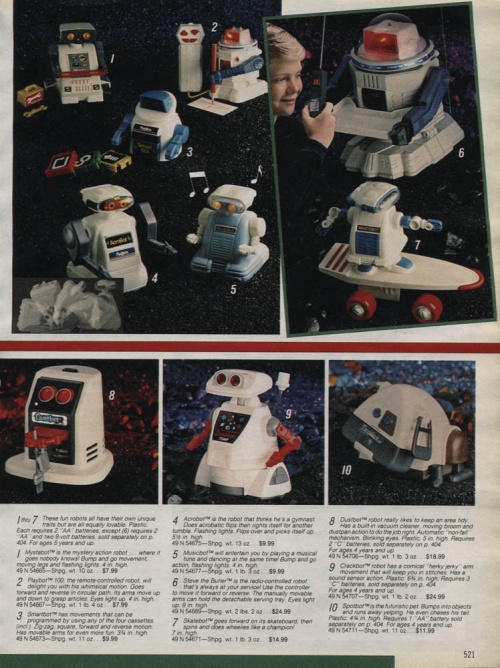 Sadly, the 1986 Catalog is missing the next 100 or so pages, including video games. Ah well - no crappy pseudo-fakey screenshots for me for now!

Though I remember always being a bit mystified when Sears would put out other catalogs during the year that just didn't have a toy section. Made no sense at all.

Well, let's go back a bit first. Two and a half thousand years ago, at the time of Aristophanes, the Greeks believed that comedy was superior to tragedy: tragedy was the merely human view of life (we sicken, we die). But comedy was the gods' view, from on high: our endless and repetitive cycle of suffering, our horror of it, our inability to escape it. The big, drunk, flawed, horny Greek gods watched us for entertainment, like a dirty, funny, violent, repetitive cartoon. And the best of the old Greek comedy tried to give us that relaxed, amused perspective on our flawed selves. We became as gods, laughing at our own follies.

http://www.slate.com/id/2277104/ - only around 6% of scientists are Republican. No wonder Republicans replace analysis with ideology.

"I am a believer in Christ," Rayford said. "I attend church. I read my Bible. I tell people what I believe."

And that, in a nutshell, is the authors' five-sentence definition of what it means to be a Christian.

It's only four sentences, you say? Well, yes, Rayford left out the fifth, traditionally unspoken, sentence: "I am become as sounding brass, or a tinkling cymbal."