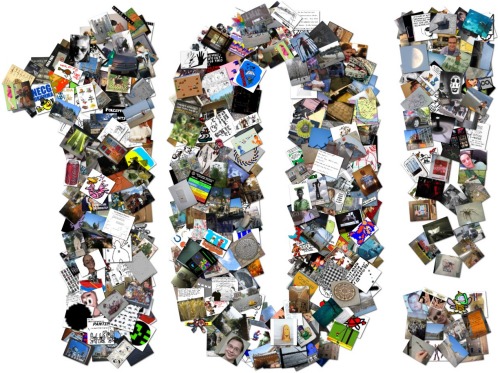 The website itself is a bit older than that, and I've been quote journaling since early 1997, but still: December 30, 2000 is when I started this thing, and I'm still not sure when it's going to end.

I've updated every day. For a while I was really strict about never missing a day, then a technical glitch forced a miss, now I'm a little bit looser, but I make up a skipped day. (I think some of the creaky Perl scripts that power this site kind of depend on there being content every day.)

A decade. That's the same amount of time that covers, say, all my time in Cleveland plus my years at Tufts. 7 jobs, 1 divorce, 5 living spaces, 2 cars... I dunno, what are some other interesting things to quantify?

The site has morphed over the years, going from a talk-y blog format quickly into a comment plus 2 or 3 interesting things goal, to the tumbl'r/twitter-ish it is today, where I try to get at least one thing worth taking in, and then any fool thought that pops into my head. Plus there's that "do I call it kisrael.com or kirkjerk.com" issue that'll probably be around forever.

This site is a kind of anchor for me, and along with my private "mundane diary" represents my attempt to track my life-- sure, this decade has gone by faster than any I'd lived previously, as is the nature of decades, but I really do feel I have some footprints to look back on. (And I go through phases where I enjoy looking at the restrospect "this day on the site in years past" feature. I wish I knew a way of preserving it "in perpetuity" even when I pass on, though I know it's some unfounded bit of vanity to assume anyone would want to look at it.

Fun fact: I had the idea for making this blog around the end of 2000, and rushed to get it in the last few days so I could say it started "in 2000". Cute idea, though it makes my archive by month page look a bit unbalanced.

Tech note... today's collage consists of 400 images (out of about ten times that total) randomly picked from my "journal.aux" directory. I ponied up for the full license for the software so let me know if you have any clever ideas for making something similar...