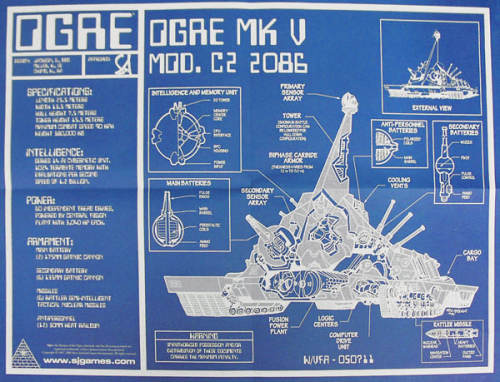 --I really liked Steve Jackson's "OGRE" boardgame back in the day, even if it seemed unbalanced -- at least the way my friends and I played. The game is about a GIANT automated tank rolling through more conventional forces to demolish their HQ... I think the non-OGRE side could shoot the treads off and win consistently.(via) http://blogs.villagevoice.com/runninscared/2011/01/the_20_best_nic.php - 20 best mafia nicknames in the recent bust.

See? Life is FULL of meaning... but so is an eviction notice.

I used to think humans were worms in a cosmic plan.
Then I remembered, that in the final analysis-
-the worms win.

http://is.gd/JWCtog - it's not about being right, just progressively less wrong. This is why science is better than fundamentalism. Last night I led a discussion at my UU "Science and Spirituality" group on William Irvine's Stoicism Book "A Guide to the Good Life". One woman who had previously flustered me by asking "would you please finish a sentence?" (meaning she was having trouble following my rambling mode of talk, how I can tend to jam my parenthetical asides in too early and then wend my way back) said I was much improved that night; I admit her original comment kind of irked me, but I took it a bit to heart and tried to improve, but I was still surprised (as was she!) that there was a noticeable improvement, and it was lovely of her to mention the change.