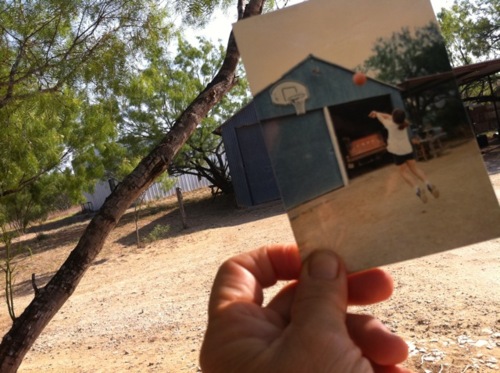 The caption was "I drained 3s all day!"-- the site is Dear Photograph where people overlay an old photograph over the current scene.

I'm kind of sad about how relatively few options I have for this, in terms of places I've lived at least.

The idea reminds me of my old ghost of a snowman, though that was a product of a digital age. http://www.boingboing.net/2011/06/17/vegas-earth-moving-t.html I think I found out what I want for Christmas...

Saying someone has too much time on his hands is another way of saying you think he doesn't watch enough TV. http://bit.ly/l7SVvn

PROTIP: ctrl-shift-del opens up history clearing dialog in the big 3 browsers. (Though IE might need restarting to REALLY clear, sigh.)