a cold rainy day in beantown 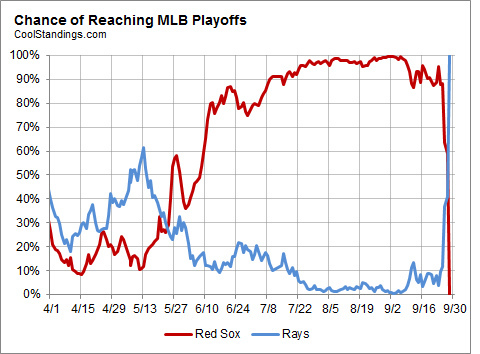 Red Sox had a choke for the ages yesterday. The graph source points out that it wasn't just the month of September-- into the late innings, things were looking "ok"... Such a set of statistical craziness ("Multiply those four probabilities together, and you get a combined probability of about one chance in 278 million of all these events coming together in quite this way.") is making people question ideas that streaks and chokes are semi-mythological. (Personall, I think it started when bad hitting made Tim Wakefield have to play like 8 or 9 games before he got his 200th win. That got the pitching thinking. And choking.

For bitter fun, check out ESPN's picks at the start of the season.

Ah well, it's not losing a series after being ahead 3 games to none or anything, but still.

(And Patriots' last game... and the NBA strike...Bruins anyone?)

Everybody lies, but it doesn't matter because nobody listens.

Man. Yesterday: Amazon intros cheap tablet, but that "silk" web thing scares me; Microsoft starts getting money from android, and Sox choke BoA to charge $5/mo for using debit cards at stores. Might be time to look for alternatives...

Anything's a toy if you play with it.