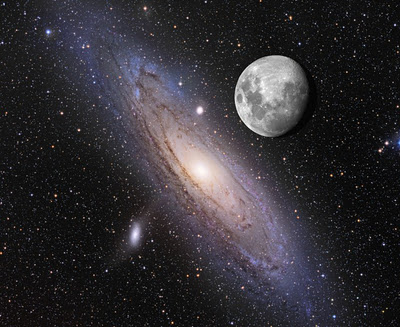 The other week I posted on Facebook and Google+ about something a friend had claimed, that the night sky was mostly full of distant but visible galaxies, not local stars. This is incorrect. One of my buddies confirm the error of his thinking pointed to the photo above. It's also posted here with some deeper explanation. The photo is a composite, i.e. the sky never quite looks like that even with a great telescope, but it gets the idea of what we're missing with our naked eyes.

Man, that galaxy is huge! Or close. Or both!

I'm chagrined at how long it took me to confirm my friend was wrong (I was realizing the components of constellations were mostly talked about as stars, not galaxies) but I guess it's hard to have a first-hand intuition about this scale of thing!