Slate on Demographics and our likely future of cycles gridlock. So, Democrats have demographics on their side, Republicans have more adamant (and old) voters who refuse any idea of compromise. So we'll get Democratic presidents and Republican Congress, and more flipflopping Senta-wise, with that wonky 6 year cycle.

Personally I think Republicans need to grow up. You already see some signs of this, like how many have had to shift on former bedrock issues like gay rights. The article suggests they could use a leader to water down the more radical part and widely unpalatable parts of the conservatism, just like Clinton watered down the liberalism. Hunter took this photo of me pontificating, or maybe doing a vampire impression of some sort, at last night's TechHub Boston Demo night (at Harpoon Brewery) 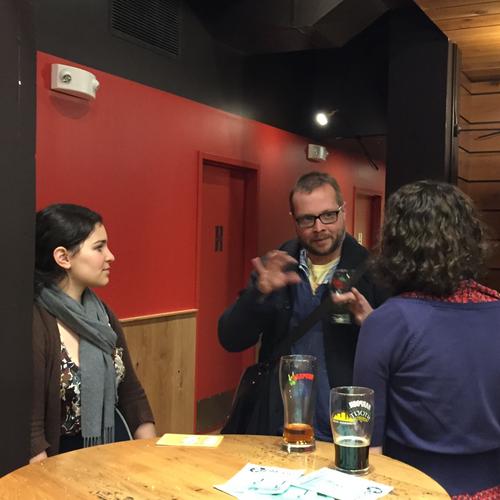 The Sixth Stage of Grief Is Retro-computing - a beautiful treatise on old computers and listening to people. "Avuncular" is a lovely thing to be, and I should work to be better at it, especially as some kids important to me grow to ages where I can share bits of creative geekery with them.