tuba
So, a few weeks late, here's what the costume for me and my tuba looked like on Dunster Rd Halloween night... I'm not sure if my makeup actually looked "skull-like" as was its intention, but overall it kind of added to the effect. Or maybe the affect. 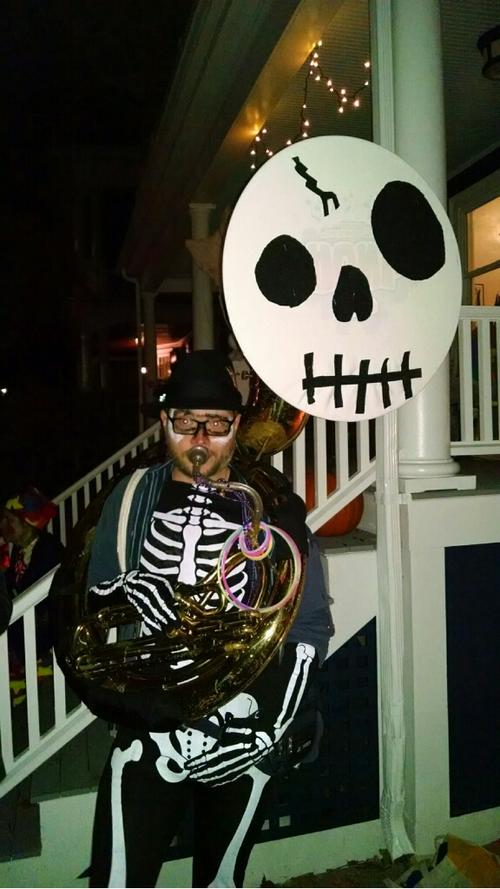 Even though it was reviled as being inconsistent and unpredictable, I preferred the old OSX "zoom" button behavior, where it (kinda sorta) maximized the window within the context of the current set of windows over the new "take over the whole screen world" pattern it has in Yosemite. I often want a bit more real estate for a given window, and rarely am I thinking "boy I wish I was looking at this window AND NOTHING ELSE MATTERS IN MY COMPUTER'S WORLD".

Besides predictability (especially when resizing browsers; some people found it odd that it didn't always try to be as wide as possible) I suppose Apple is trying to catch an iOS-like sense of "focus on this one thing" monotasking, and so they hide the dock and title bar. Personally, I think this is a UX misthink; a flavor of multitasking (or at least quick task switching) is fundamental to many people's use of a laptop or desktop.

(I like how Windows 7 did it; the window still takes up the full screen, but then you can reposition it)

Anyway, you can hold "option" when you click the green circle, and then gets the old zoom behavior; I just wish there was a way to switch which one was the default.
http://loveblender.com/

November Blender of Love!
So, New Orleans changed its basketball team name to "Pelicans"?
They're bitter about Utah hogging the name "Jazz", but somehow passed on the name "Krewe" or "Brass". Too bad! Ah, Inbox + Todo List Zero! It has been a while.