Reza Aslan vs Biblical Literalism. Last night at my UU Science and Spirtuality I went on kind of a minirant, about how Literalism and Fundamentalism is just one of the most self-centered, unempathetic, pig-headed ways of being; you're so convinced of your truth/Truth that you totally dismiss (at best! Too often you get violent or at least condescending) the equally fervently held truth/Truth of all the other religions and doctrines. And not only that, according to Aslan, not even your own church's founders were so intent and insisting Truth = truth.

I was counseled to try and be less harshly judgemental, that Us vs Them Rah-Rahism is such a human and historically recurrent thing, but it's tough. I still think Fundamentalism, whether Christian, Moslem, Atheist, Communist, Anarcho-Capitalist, whatever, when you grab onto ideas with such ferocity that the humanity and empathy and kindness is scrunched out, is the biggest block to human progress. It's why I want to be such an Extremist Moderate. (And I am not unaware of the rhetorical risks of contradiction of this stance.) I enjoyed the wheelbarrow full of air.
iPhone 6 finally arrived! I think as a an object of design, it's probably the most boring iPhone yet; just a big video billboard with rounded edges. The good part is that it's thinness makes a case less unpleasant, so on a whim months ago I had a custom case made with my old James Harvey Alien Bill commission. (This is only the plain 6; it might look larger so close to the mirror...) 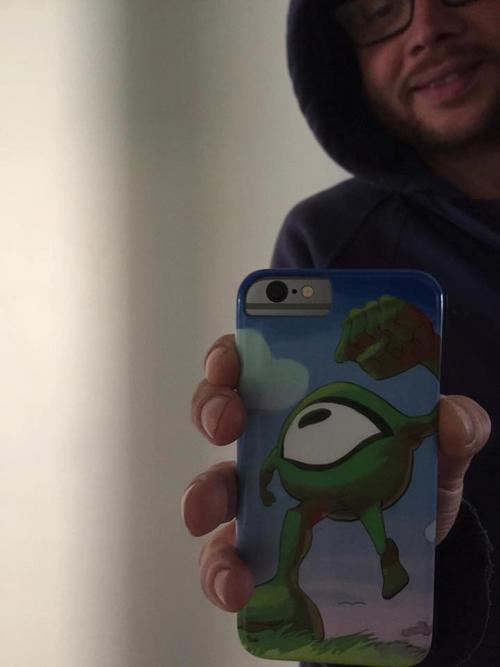