photostravel
August 19, 2016
I wasn't sure how much tourist time I'd get in Ireland during AOL #DevFest2016, but a 2 hour walking tour on Thursday, ending at the AOL office and with a great guide Sean of LetzGo City Tours showed us quite a lot in the two or so hours we had. 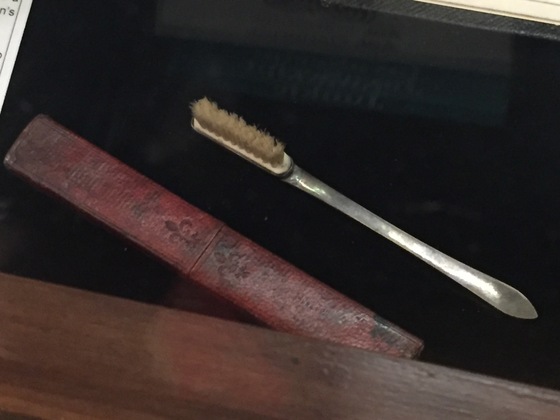 One claim to fame of the Royal College of Physicians of Ireland where we had the 'Fest was: Napoleon's Toothbrush! 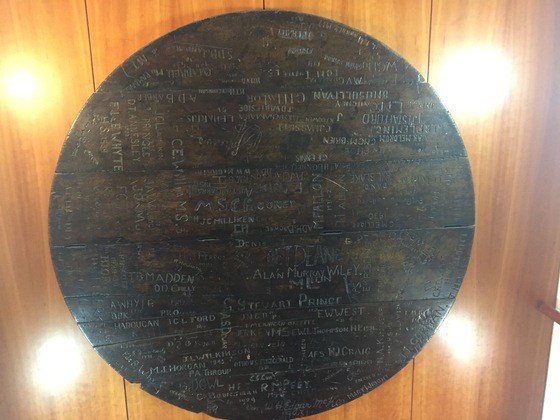 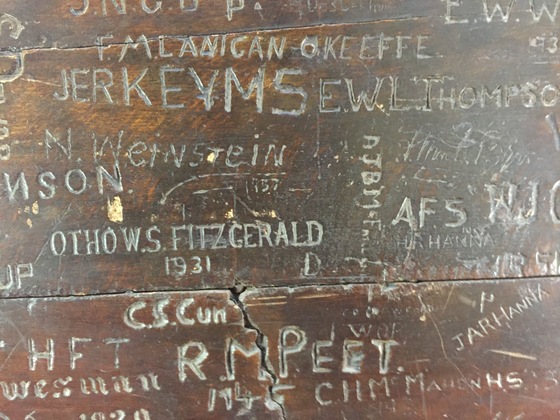 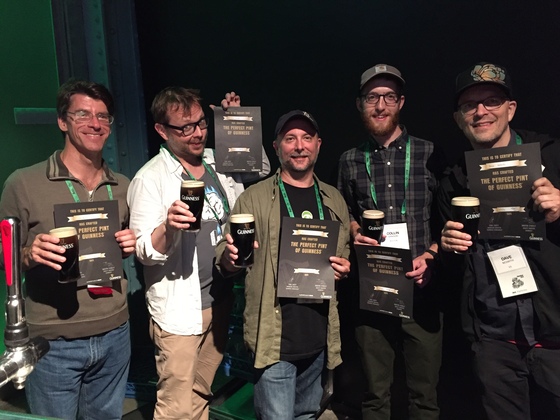 After conference Wednesday was dinner The Guinness Storehouse... the industrial scale inside is impressive. They also have a "learn to pour the perfect pint" certificate class. Can I put this on my Linked In?

Atop the storehouse is "The Gravity Bar" with a great panorama view of Dublin - probably cooler in the daytime? 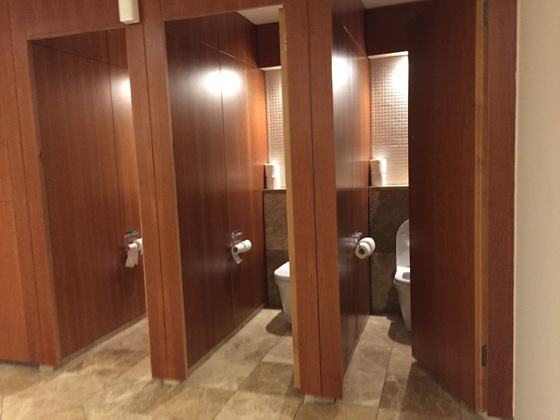 Can I say, most Americans become big fans of the toilet stalls that are actually little rooms? USA stalls with their gaps and what not must seem awfully low-rent to Europeans. 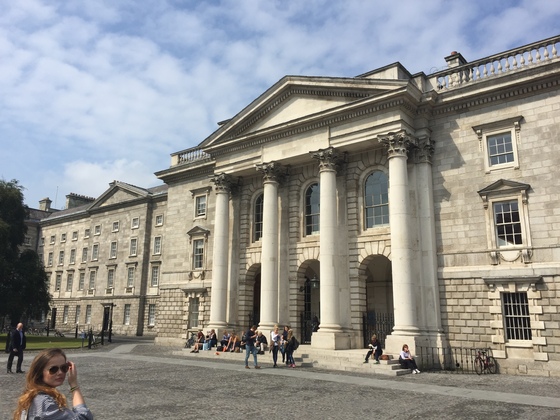 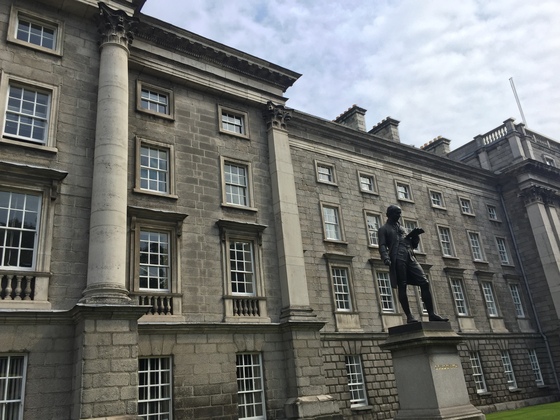 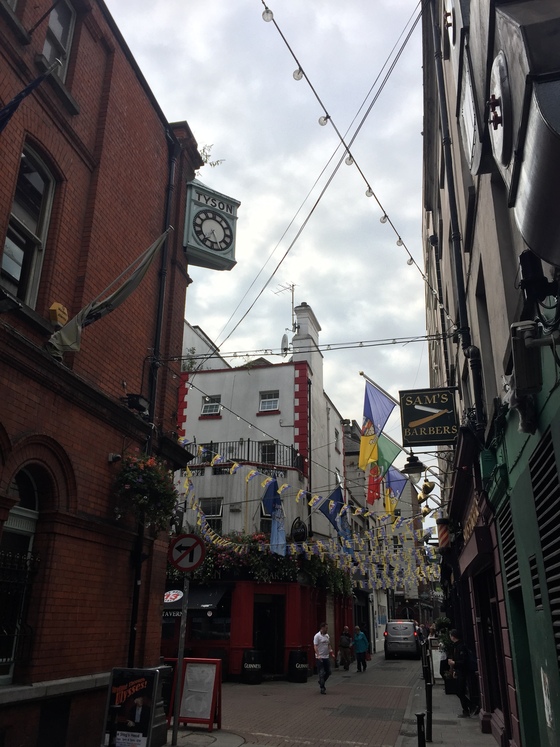 Alleyway, festive for the upcoming Galway and Tipperary football match 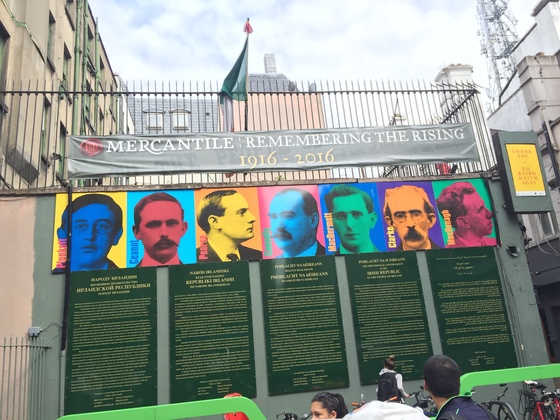 It's the centennial of the Easter Rising, an important time for Irish Independence. 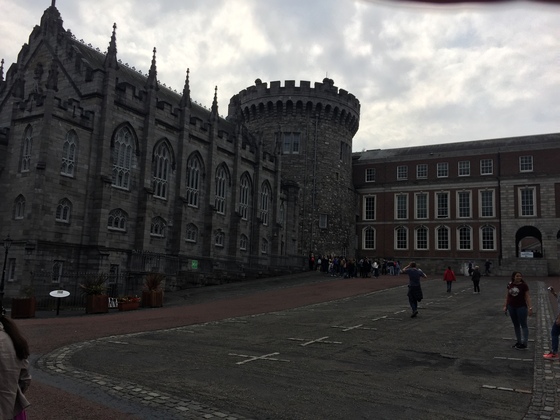 Dublin Castle has an interesting mishmash of styles on this wall! 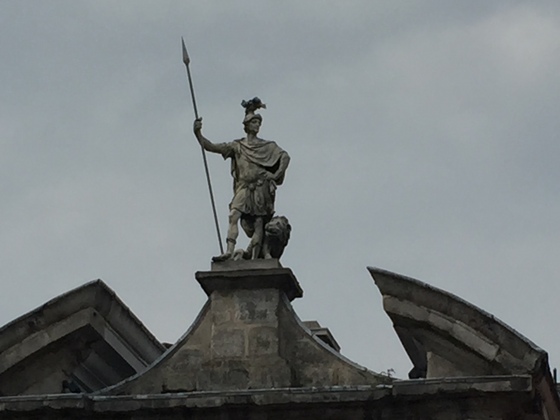 It's worth reading up on the The Statue of Justice (mark well her station / her face to the castle / and her arse to the nation) but my photo of her companion came out better. 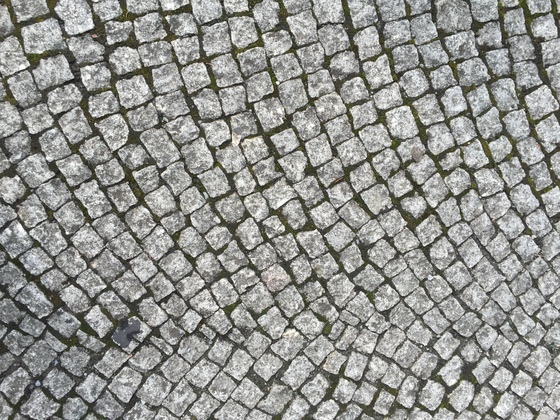 Detail from grounds of a viking house remnant. Before this trip I had no idea about the Viking influence in the culture. (Or the Spanish, "Black Irish"/"Northern Spaniards" connection, as our guide Sean put it.) 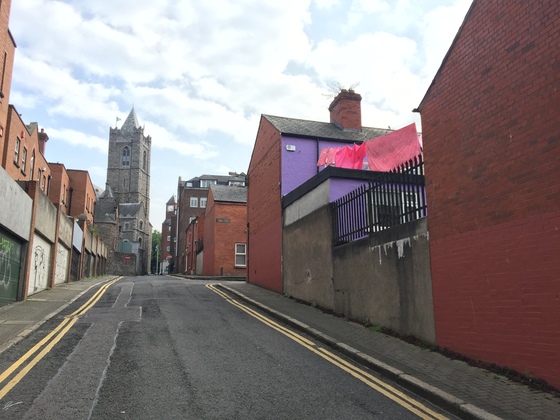 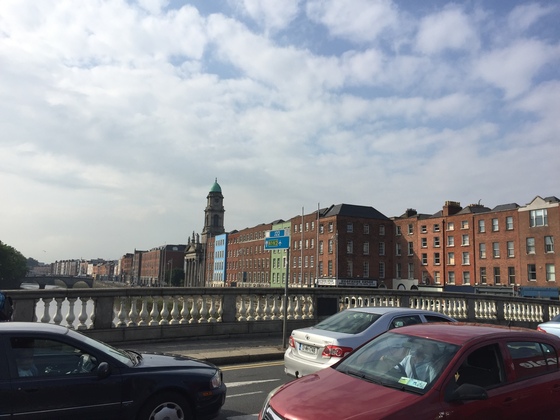 View down the River Liffey. 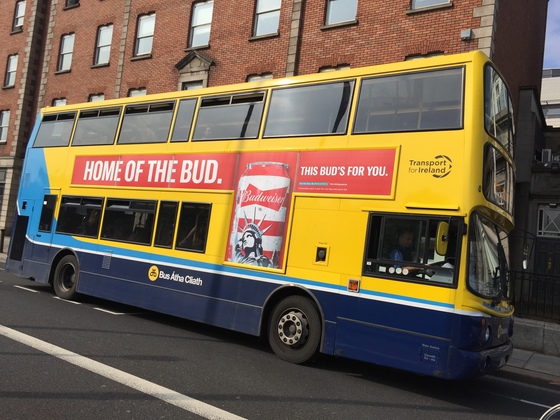 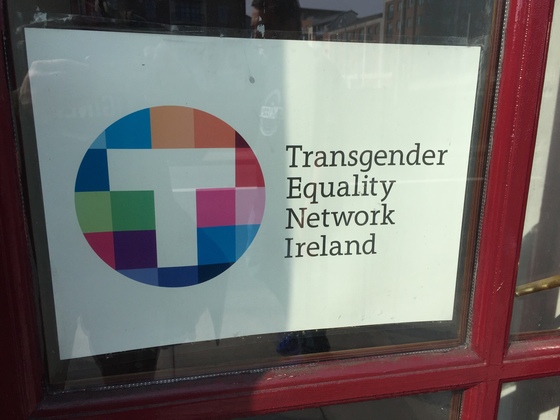 Well, Ireland maybe there will be hope for you yet. 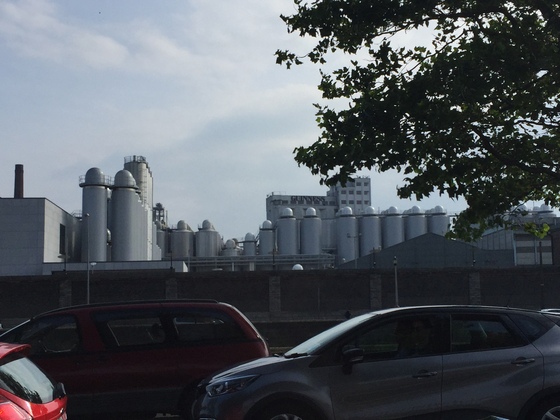 The fortress of Guinness!

Panorama from AOL Dublin. On the left is the Royal Hospital Kilmainham and grounds, Phoenix Park (Europe's largest) and the Wellington Monument on the right... take that tooth, Napoleon's Toothbrush! 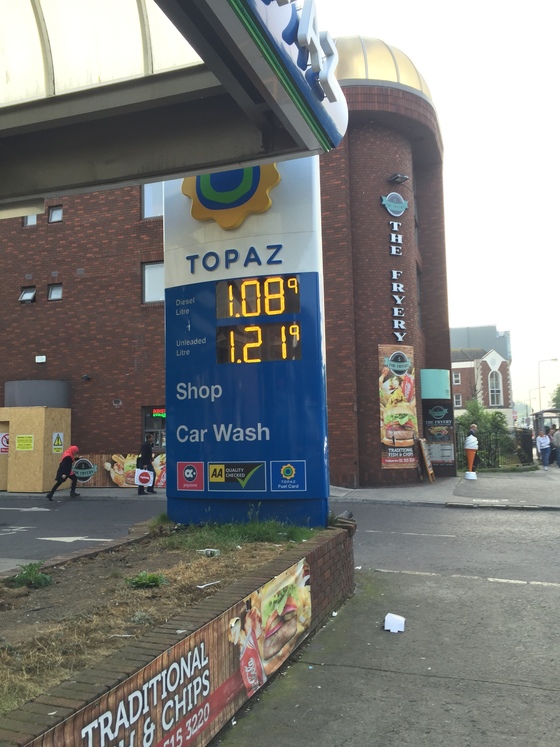 Can I just say, this Gas is $5.24 by my calculations. I know the USA is a larger country, but how would we be if our gas prices were anywhere near there? 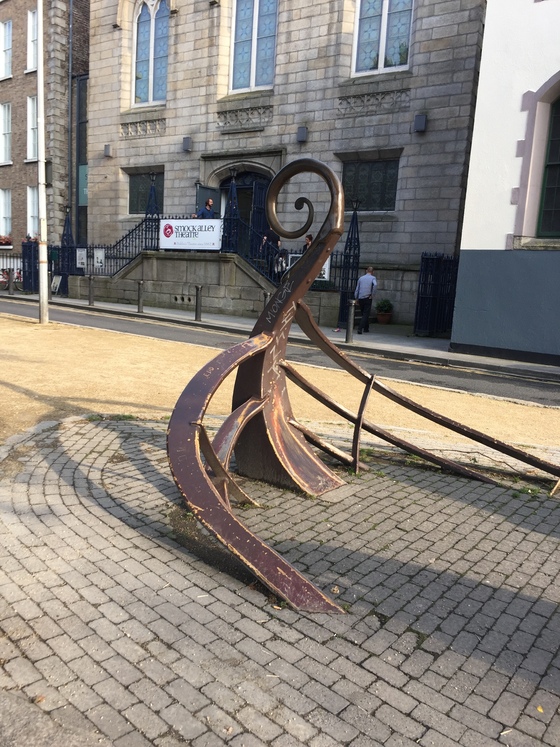 The Science Gallery had an exhibit "Seeing: What Are You Looking At?". I disagree with most of this poster, except maybe the ending. Seeing is pretty awesome, and a remarkably detailed way of putting together a view of the world, though like the poster says, it's easy to mistake the map for the territory. 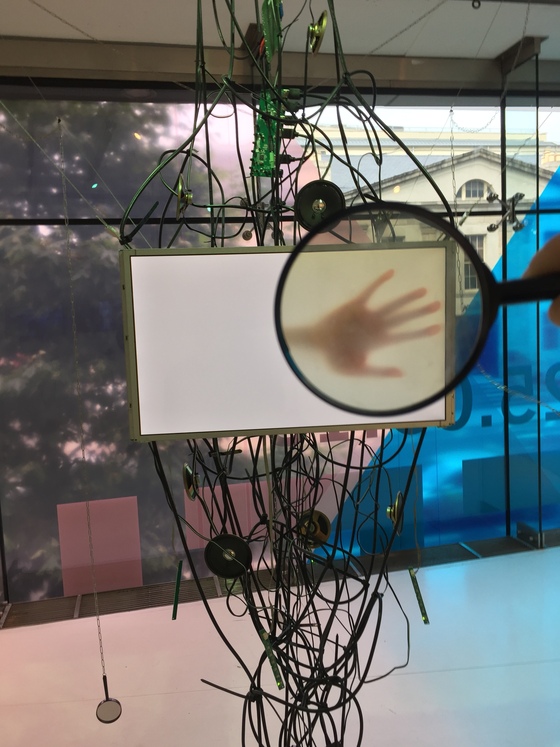 This piece was cool, sounds from the speakers, and screens that seemed empty until you used the maginifying-glass like filters to see the animation. 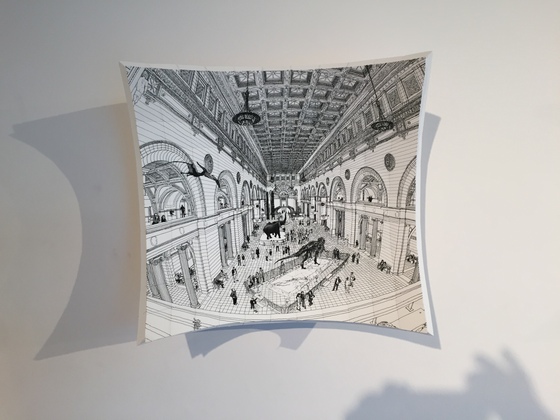 Piece by The Oakes Twins, they draw on concave paper. 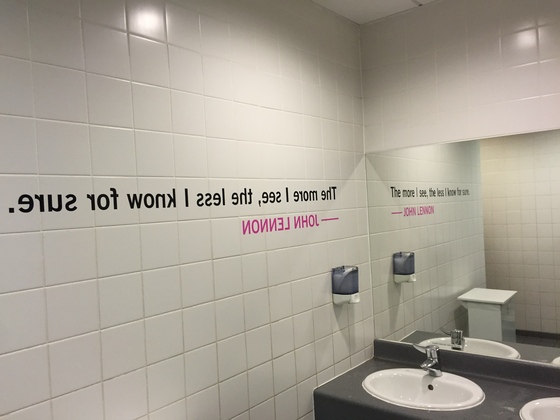 Finally, even the men's room sink was cool at this place. 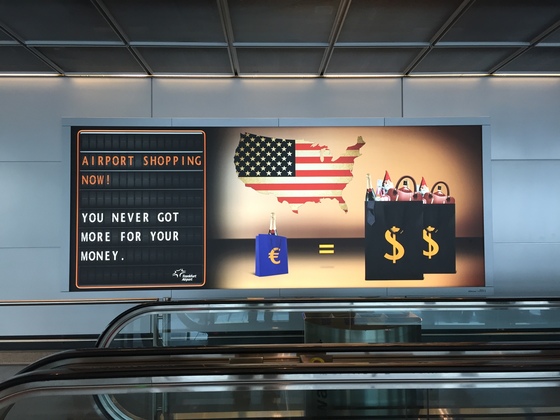 I know I'm being dense but I don't get the graphical message here. The text is implying things are cheap here (~$4.70 for a small bottle of soda not withstanding) but unless they're making a really bold claim about relative currency evaluations, it doesn't make a lot of sense? how do I parse this? I think that the pain in the ass factor of our customs and immigration process relative to other wealthy democracies says loads. and not in the USA's favor. It's not that we're THAT much more popular, we're just a big old C.Y.A. nation.