rambleself
January 12, 2017
tl;dr: The traffic isn't against you. It's just the traffic.

In Cat's Cradle, Kurt Vonnegut introduces the concept of a "wrang-wrang": a person who steers people away from a line of thinking by reducing that line, with the example of the wrang-wrang's own life, to an absurdity. 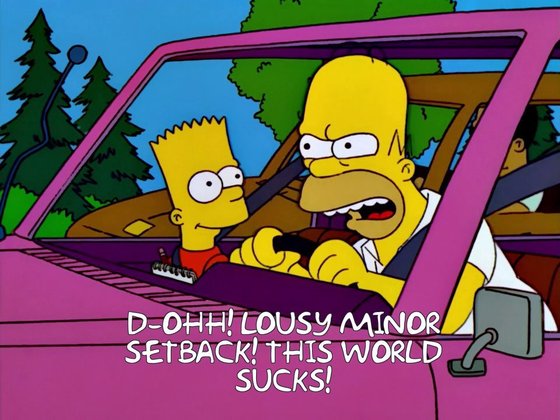 A sudden irrational and disproportionate fury at somewhat trivial things that are out of my control. In some circumstances I'm almost too controlled, many of my potential feelings of desire have to be vetted by my inner judge before they're allowed... but the feeling of "this is just wrong" rises up in a sudden furious tantrum, and I don't like that about myself. (It's gotten me into trouble in previous jobs; it's not that I rant and rave endlessly, it's just that one moment of exposed anger, even if directed at a system and not an object, can make people very uncomfortable.)

A few years later I read about William Irvine's modern application classical Stoicism, in "A Guide to the Good Life'; protecting one's equanimity and contentment at all costs, in part by triaging the world into things one has complete control over, no control over, and somewhere in between, and attending only to the first and last category, along with "negative visualization" - a meditative technique of thinking about how bad things could get, and then being happy when they're better than that; and realizing that you'd be able to cope even if they were that bad. So that was helpful, but just recognizing that a situation was out of my control didn't actually help my equanimity all that much.

Other approaches suggested themselves. I wrote this in 2015:


Recently a conversation with Derek gave me the idea of approaching the world with a kind of cheerful pessimism- assume that "a bit screwed up and annoying" is kind of the natural state of the universe, that things WILL be messed up, but generally not irretrievably so, and then be extra cheerful when the dice roll your way. "Lousy minor setbacks" that could otherwise be absolutely and inappropriately infuriating become almost soothing reminders that Murphy's in His Heaven and all's right, or wrong in the right way, with the world.


Again, that sounded better on paper than in real life, in terms of not being upset. I don't really want to be all that dour all the time.

In early 2016, I stumbled on "Amor Fati" - still a concept that resonates for me, a call for the cultivation of love of one's fate, even the parts that are unpleasant, that you wouldn't have it any other way. As Nietzsche put it:


"My formula for greatness in a human being is amor fati: that one wants nothing to be different, not forward, not backward, not in all eternity. Not merely bear what is necessary, still less conceal it--all idealism is mendacity in the face of what is necessary--but love it."


I felt - still feel - that much of the problem is that our monkey brains are so good at daydreaming up these alternate realities that are just like this one, but better - this same roadway, this same car, not all these other cars - but those realities don't exist in our world, except for the power we give them to make us unhappy.

Later in the fall I also stumbled on the idea of using empathy to make situations more palatable. In its more extreme form, this is a kind of hippy-dippy "we are all one thing", but even without going to that extreme, if you see yourself on a common team of humanity, someone cutting you off might be a win you can share in. Of course, this doesn't apply to traffic jams so much, at least when everyone is equally stuck. (Remember- you're not 'in' a traffic jam, you 'are' the traffic jam)

But now I've found what seems the strongest counter-formula yet... the recognition of this weird animism humans tend to have, that we look for intent and purpose even in things that are just accidental and emergent. The first stage of the this realization was that "it is absurd to take traffic personally". And yet I do. Later, in the movie "Mistress America" I found the even wider application: "The path isn't against you. It's just the path." I've been finding that a very useful mantra lately. Similarly, when I get mad at a malfunctioning device or app, I should give it some sympathy, or even empathy; it's doing the best it can, you know? It has no sense of mischievousness, and it's more accurate to presume it would like to be doing a good job for me than whatever its current results actually are.

The other nice thing is that these various view points are complementary, they don't really undercut each other that much. (I've been told that's characteristic of Eastern religions, in general they are less combative, and defensive of their "unique path to truth" sense, than many Western outlooks.)

The traffic isn't against you. It's just the traffic.

FOLLOWUP (2017.02.27): Whether I'm furious about it and making myself angry or accepting of it, the traffic is still there. So why be furious? The only counter-example is if my rage now helps me avoid future bad traffic. But I could probably do that via rationality, not just gut level rage...