1. That state compliance map looks a lot like the red/blue split

2. I wonder what MA IDs are lacking feature wise

3. In trying to find out "2" I ran into
---
New applicants for identification would also have to obtain a "Real ID" compliant card, which would be marked with a yellow star and require applicants to prove their full legal name, date of birth, residence in Massachusetts and provide a verifiable birth certificate, Social Security number or other proof of lawful residence.
---
marked with a yellow star, huh? Superb optics there. In the back room Melissa and I use as an office and my dressing room, I replaced a boring (and too small) IKEA chest-of-drawers with big ol' IKEA KALLAX (formerly "EXPEDIT", more or less) blocks. 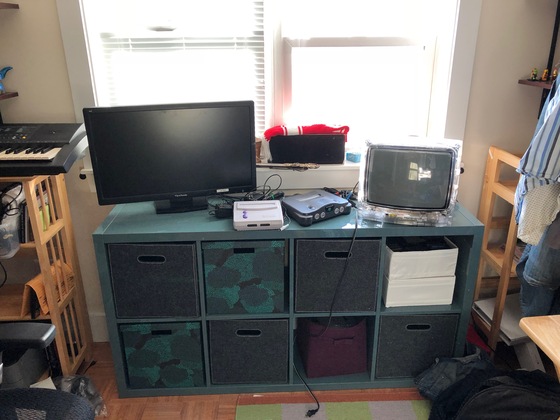 It's funny how IKEA, clean Scandinavian design seem timeless to me. I remember looking at IKEA catalogs in the 80s and to the best of my recollection that stuff was pretty much like the stuff we have today. And even though interior design has never really been my jam, I remember being fascinated with those IKEA catalogs, along with "The New House Book". Or maybe it's just a matter of timing? Like, just how the Gap sort of permaset middlebrow clothing into a semi-aspirational, khakis look, maybe after the 70s things have just been largely settled.

Or maybe it's demographic? As officers in The Salvation Army, my parents were generally assigned pre-furnished houses or apartments ("Quarters")... at one time when they had a rare opportunity to buy all new furnishings, they went the "clean Scandanavian look". Reports were that the Officers who lived there after HATED that, and generally let everything go to crap so they could replace it with classic Colonial...

I suppose to people who like that Colonial look, IKEA stuff just looks cheap (and it can be... I mean there's no way it was meant to be moved around from apartment to apartment in the way Americans use it) and dorm-ish, while the Colonial stuff is true class... not stodgy and boring as it seems to me. As usual, I suspect a red/blue split on that, and correlations with politics etc. The 7 Deadly sins of AI prediction, or why the robots ain't coming. As impressed as I am by Watson's success in Jeopardy, say, it's not clear that at any electronic mind is really doing a great job of modeling the relationship between things.