personal growth thoughts old and new(ish) and the supernatural placebo

ramble
March 30, 2018
One of the weird things about having a long-running blog is not only can it confirm "I've had this thought before", sometimes it was FAR longer ago than I ever would have guessed - 2013.11.13 calvinism and personal growth - 4 1/2 years ago I was noticing that my fixed mindset was intensely Calvinist (in the Protestant, not Funny Pages sense... i.e. you're either of the saved elect, or of the damned masses, and nothing in your own efforts can change that) as was my behavior. The faith in that you are one of the irredeemably saved, when undercut with the fear that you might not be, is not a freeing "so do what you want!" but an intensively restrictive and uptight "you best behave! Or people will have their doubts, no matter what God thinks".

Later I've noticed times when some people a bit to the left of me, or far to the right, seem to be indicating that you have to change something at its core, and then the good interactions you're hoping for will follow. (The anecdote for the left is how to get a band to lean into being diverse and welcoming, and for the right - I've even seen it in a scholarly way of presuming that understanding the Latinate roots of a word was more important than understanding the vernacular usage of it. But I also feel the right's view that "the apple don't fall far from the tree" and justifications for racism by lumping people into the worst stereotypes of their class has the same top-down thinking.)

Me, I dunno. I have no knack for observing personal growth in myself or others. People's behaviors or abilities may change for the better - statistical clear improvements - but I never get a sense of when that can safely feel like an internalized improvement. For instance, dieting never becomes easy, it's always a matter of gumption and leading myself way the hell away from temptation, because frankly if the delicious food is right there I'm gonna eat it. New eating habits never form and so constant vigilance is the requirement.

Further thought: On the 2013 post (man I hadn't shut down my comments section because of spammers by then?) an anonymous commenter wrote "And Somewhere in the salvation army, an angel just spit in its soup." Which is funny, because I had been thinking about how The Salvation Army really is about people being redeemed, through the life changing power of Jesus Christ.

I guess it's telling that both they and, say, AA look to a supernatural power as necessary for making a true change.

Given my current skepticism, I'm at least heartened by pondering on how insanely powerful the Placebo effect is in medicine.... It's too bad we don't respect placebos, because a belief in God is a powerful psychological bending thing, and that's true, for good or for ill, regardless of the supernatural truth behind any given belief... 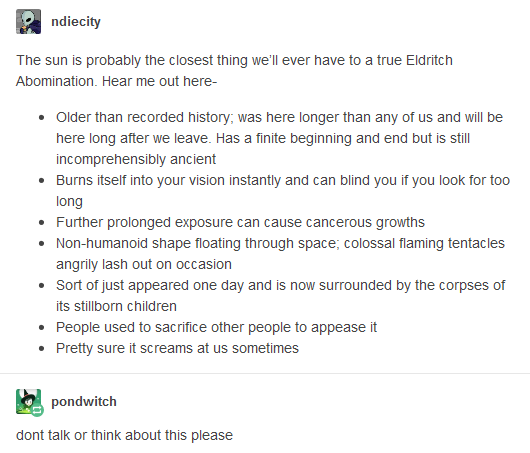 The sun is probably the closest thing we’ll ever have to a true Eldritch Abomination. Hear me out here- 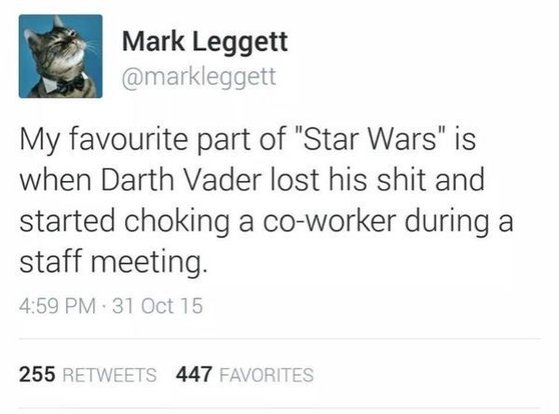 My sweet Melissa works in the same building as me - in fact her company's "Beer Garden" is an atrium visible from our office area and she left me this message... 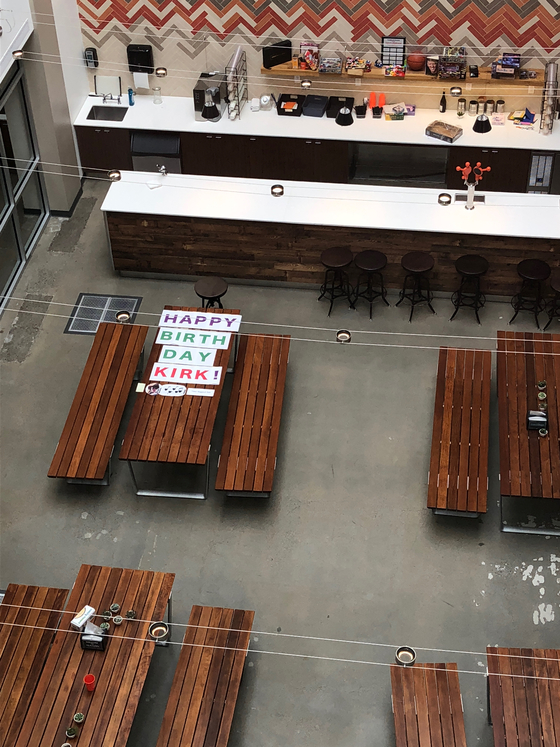