what's in a name

history
October 28, 2018
Recently a great episode of the Allusionist podcast talked about how people feel about their names, especially people who end up changing theirs.

On FB, I asked folks "how do you feel about your name? Do you know what your folks were thinking when they gave the first part of it to you? What about your family name?"

I enjoyed reading the stories some of my friends shared, but here's what I wrote about mine:

I dig my name, first name especially - "Kirk". My dad (James/Jim) liked the idea of a name that couldn't really be shorted, though I'm not sure how much he disliked "Jim". My name is dripping with religion, Kirk is "Church", Logan is after a theologian, Israel is like the country. Which tends to lead to erasure of my evangelical preacher's kid upbringing w/ people assuming I'm Jewish, but hey, I'm not THAT not-Jewish. (Also most Americans will spell Israel "Isreal" like they hear it pronounced.)

But I dig the strength of the K-sounds.

(Of course if I was born one day after my actual birthday of March 31 my dad assured me my name would be "Foolsbert" - Foolella if I was a gal. (Also, Iove how weird my birthday is - 31st is the least common of all month day numbers))

Once, undergoing adolescent angst, I used yet another move (Upstate NY to Cleveland) to go by "Logan" as first name for a while...odd situation when I switched back when I changed school districts but kept attending the same church. A letter was being read about my enrollment (akin to confirmation) that called me Kirk, but he knew me as Logan, and then-Captain-Schenk said "aww just call him Butch" and with a little work on my part it sort of stuck. My full church nickname was "Kirk Logan Brother Butch Israel Brother".
[...]
FUN FACT: my mom had to convince her friends I wasn't being named after the captain from her fav sci-fi tv show. She had to convince her REALLY close friends I wasn't being named after a similarly named character in some "Bonanza" fanfic she and her friends would write

I love how David Price's hat jumps as he moves his eyebrows or whatever, like when you're trying to wiggle your ears but you're not really good at it... Also his pre-pitch "take a deep breath" routine is so human and recognizable. Mookie Betts breaks his series drought and helps the Red Sox win the World Series and gets a hat for his hat: 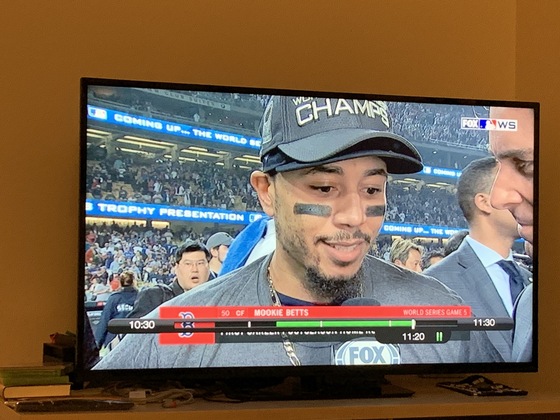 What an era to be a fair-weather fan in Boston :-D What's this, 11 championships (Celtics, Bruins, 5 for Pats, now 4 for Red Sox) since 2002? Also: in Alex Cora We Trust, Huh? He has done some seemingly inexplicable moves that in hindsight are pure brilliance. Between that and hearing how, despite a top of the list payroll, so much of the Red Sox team is young and home grown - and seeing how those "supporting" players stepped up Saturday night, and in general how the team played on defense as well... it's a great team to like! Oh and that jerk Machado getting the last strike out... ahhh