meta
November 4, 2018
So from 2003-2013 or so this site had a comments section - it acted as a bit of a social hub, with a medium-small group of folks I knew from real life or just online commenting on the entry or just having little dialogs there.

But then comment spammers figured out how to post, and it got overwhelmed with the crap. I tried a few restrictions to block it (disallowing links, even) but still, the bots would post post post-- mostly just to gauge if they could, I guess.

Two decades in, and this blog's archive is increasingly important to me -
(skimming the On This Day page is a frequent mid-workday getaway) and I was getting frustrated with the bogus comment counts, so I made a tool to help me zip through and ditch all the damn spam.

I had already purged some of the most egregious days of spam (hey if one spam comment is good, 138 nearly identical comments must be better right?) but there was plenty remaining- At the start, I had 24035 comments in all (over 4048 different days), but only 7507 did I figure were human or close enough (covering 2072 different days).

It was interesting skimming so much old conversation... sympathy through a divorce, advice on dieting, appreciation of vacation photos, and just general rambling. I forgot how much I used to hear from folks like Jesse Lex and LAN3.

But, probably independent of the spam, the site had a rise and fall as a social nexus, I decided to graph it out:

This is very similar to a chart plotting the rise and fall of poems sent to my loveblender.com site: 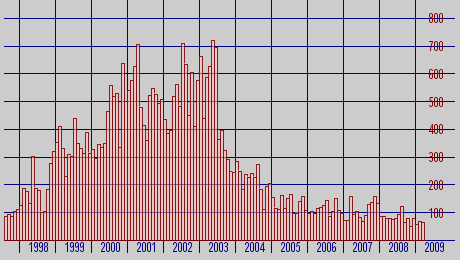 It's not an apples to apples comparison, in part because the comment section had such a later start.

Overall I think the decline in interactions on my blog-ish sites corresponds to the the rise of Facebook, Tumblr, Twitter, Instagram, etc - I've written about that on my devblog. Basically, it's super tough for an individual site or writer (especially ones who aren't trying to do it for a living) to compete with the ability to grab a lot of people's stuff and put it into a single stream. Onion: Explanation Of Board Game Rules Peppered With Reassurances That It Will Be Fun - I am the friends, not the "Area Man" in this scenario.