November 16, 2018
I do daydream about making an expanded version of my self-published comic on coping with mortality, something that captures the best of my thinking not just on death but on the best way to get through life.

I continue to look for the best app to do that with, experimenting with various paint programs (over the year I've spent so much money on devices with touch sensitive screens, each time thinking "maybe THIS will be the one that lets my doodle skills blossom") Apple iPad's "Notes" program probably can't be it (if only because it doesn't deal with layers) but it really has some interesting UI decisions: coloring with the marker is more or less two-toned, paint once then start painting on the same spot to get a darker shade. And the eraser tool is kind of wild: it's like using the "Undo" button (that might erase a set of lines squiggles you made without lifting the stylus all at once) but instead of removing the last thing you did, it removes what ever you poke with the eraser tool. It's disconcerting at first, but kind of encourages a "well if you mess up you can do that whole thing over" approach.

I'm appropriately humble about my doodle skills, but looking at the sesame street characters I drew from memory during a meeting, I wonder if some of the lack of depth most of my stuff has comes from my preferences for using flat flood fill to color with... it's interesting to let go of a kind of "coloring perfectionism". 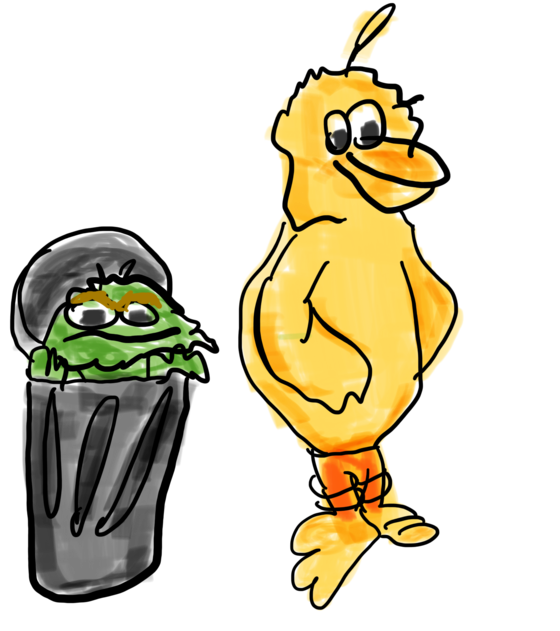 I really do think that love is the best thing in the world, except for cough drops. But I also have to say, for the umpty-umpth time, that life isn't fair. It's just fairer than death, that's all.