no crime and punishment 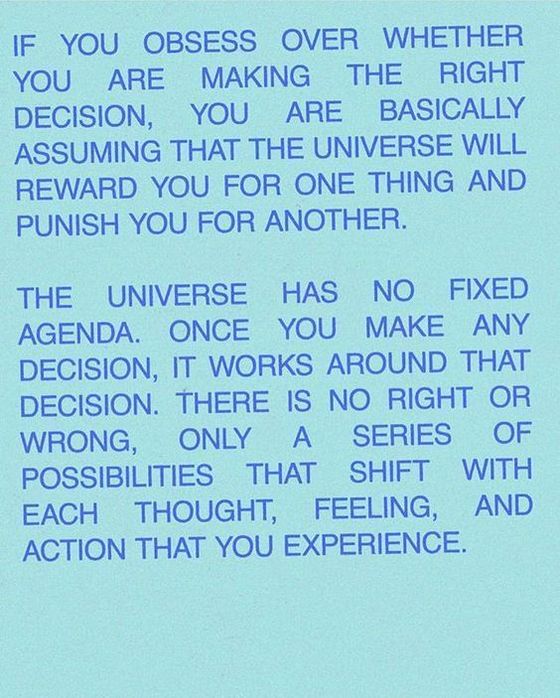 For me fretting about a decision is also about forgetting that there's no god's eye view even possible - no means of looking forward and back in time with perfect knowledge, and thus no ability to consistently judge what the right course is, or was, or will be.

This is beyond there not being someone or some thing to punish me just for the sake of not having made the optimal choice, which is the passage's point - that all the universe provides is circumstance and consequences, not judgement with punishment or reward.

(But even without that cosmic judge, it's easy to live in fear of my future self regarding my present self with scorn. So I try and be sympathetic and empathetic with my past self - that bozo was doing about the best he could with what he got, prisoner of a a chain of cause and effect going back to the start of the universe, as are we all.)

UPDATE: on my FB Matt I. brought up a good counter:

The OP is totally wrong--I'm not fretting that the universe will punish me, I'm really worried precisely that it *won't* punish me so there's no real incentive for me to do the right thing, and I have to be extra careful as a result.

I think the original passage doesn't half to be read s 100% selfish - like you could be anxious that others will be punished for your choice - but the point is that someone could be blasé about their own choices as long as the negative consequences were on others is a good one.

UPDATE TO THE UPDATE: Both Matt and my ex Mo seemed to read the passage in the sense of personal good vs group benefit moral sense, but that spectrum didn't even register to me until Matt started talking about it - on closer inspection I think the difference is in the phrase "Right Decision" - I read it exclusively as "Correct Decision" while Matt and Maureen seem to have read it as "Morally Righteous Decision". "We go straight from the gut, right sir? That's where the truth lies, right down here in the gut. Do you know you have more nerve endings in your gut than you have in your head? You can look it up. I know some of you are going to say "I did look it up, and that's not true." That's 'cause you looked it up in a book." Steve Colbert was the John the Baptist of Truthiness, but Trump is its Jesus. It is amazing how his followers will believe him over EVERY other source of information. Case in point:

‘Oh, crime actually stayed the same.’ Didn’t stay the same! It went way down. … These people, you know, you’d think they’d want to get to the bottom of a problem … not try and pull the wool over everybody’s eyes.”

Then Trump delivered his closing pitch, a direct appeal to intuition over evidence. You don’t need to check the numbers, he argued, since you already know walls work. “It’s fake news. I’m telling you, it’s just fake news,” the president jeered. “And you know what? You wouldn’t even have to know. You can say that automatically, without even knowing. It’s, like, it’s obvious, it’s common sense.”

you: the world has meaning

you: the world has no meaning

you: the world has meaning but not the kind I want

you: the world has meaning but only to me

you: i imbue the world w meaning

you: meaninglessness is a form of meaning

you: the world itself is meaning