ballad of the second guesser

rambleself
March 7, 2019
My best attempt to explain something that's been on my mind a lot lately: 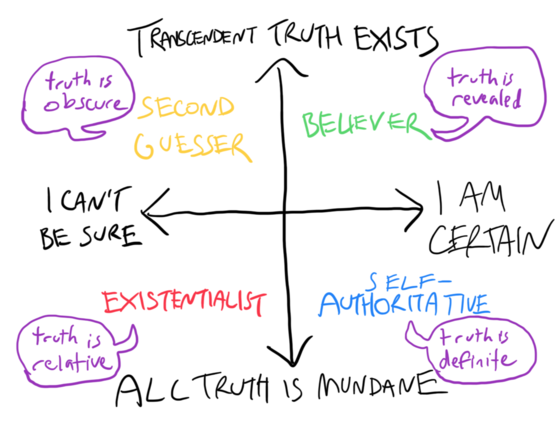 Lately my work went over the DiSC personality assessment. At one point we got to discussing the "Conscientiousness" type. Our session leader's assumption that I, as someone who desperately tries to see things from all angles, would be a "C"-type, since they are so urgent that things are correct, and therefore would have done their due-diligence. I disagreed that I was that type - I think what is critical is that the "C"-type folk have FOUND what they believe to be the best answer, and are then content to enforce that as best practice, while I tend to think there IS a best practice but we can never be certain we are aligned with it- but it's important that we give people the freedom to figure out their best guess as well.

So the critical factors seem to be - is there a singular best truth, and how certain can we be that we've gotten there? I think that makes a 4-quadrant spectrum, as shown here.

I know I am deeply in "Second Guesser" territory. I have this near unshakable suspicion that a transcendent truth exists - and while it's not "unknowable", we can never be certain that we've arrived at knowledge and so need to be interested in all viewpoints - all viewpoints from people of good intentions are valid signposts to what is "really" true.

The opposite view I'm calling "Self-Authoritative" until I think of a better name. There is no out-of-system truth in this view - but there are some patterns that are "clearly" better than others, and we can be confident in the superior qualities of our own subjective viewpoint.

"Believer" is my name for the top-right -- there is truth, and (possibly through special revelation) we can have faith in the accuracy of our beliefs.

Probably my most liberty-taking name is "Existentialist" -- all truth is subjective, and we'll never be positive about what's best, so every person is free to work things out for themself, and you don't have to be too anxious that other people aren't believing the "right" thing.

So does this ring true for anyone else? (asks the second guesser) Any improvements for quadrant names, or other axes that might be more useful in an epistemological kind of way?

Followup: it bums me out that Facebook is my best avenue for dialog these days (I crosspost nearly everything here and on that site) but the convo on this diagram with threads with Wendi and David was pretty good.

Followup 2: Similar to the DiSC assessment, but more resonant to me, Grentchen's Rubin's Four Tendencies model seems true to me. That link is the quiz, but the summary you get at the end goes:

I'm a questioner - though again, this taxonomy misses the epistemology of it. A questioner who is certain of themselves because of their own authority is different than one who is certain of themselves because of their image of an external objective standard. And I probably am closer to upholder because I respect the potential of other people's views of that objective truth. Sigh. Getting to Inbox Zero / Todo Zero, or failing to (even when the "zero" just applies to the categories marked as relevant") is feeling like such a daily grind. Franklin Lloyd Wright liked the term "Usonia" for the United States (of North America). I wish it had caught on (even with the gratuitous "i" to make it more euphonious) - it answers two problems: "United States" or "USA" is more of a description than a name, and it stops us from grabbing the name of two continents ("America!") to make up for the first problem.

(That said, I don't think "America" is THAT oppressive, since a person actually referring to the continents would says "Americas" or specify "North America"... mostly I prefer Usonia as a pleasant sounding name, vs a technical description.)