ramble
May 28, 2019
It's difficult for me to explain my views that A. A Most True description of the world and how you should act in it exists (even if that has to be, like, metaethics rather than a specific ethical system) but B. It is something akin to blasphemy to presume YOU have the most accurate view of that Truest Truth - especially if your certainty comes at the cost of discounting the views of folk of good faith who disagree with you. This duality can sound like a moral relativism, but the persistent sense of an absolute truth behind the scenes makes it the opposite of that.

Talking this over while driving with Dave, he suggested a pretty good metaphor: what the GPS was showing, as we tried to find a good route from Mass Ave to Porter Square: 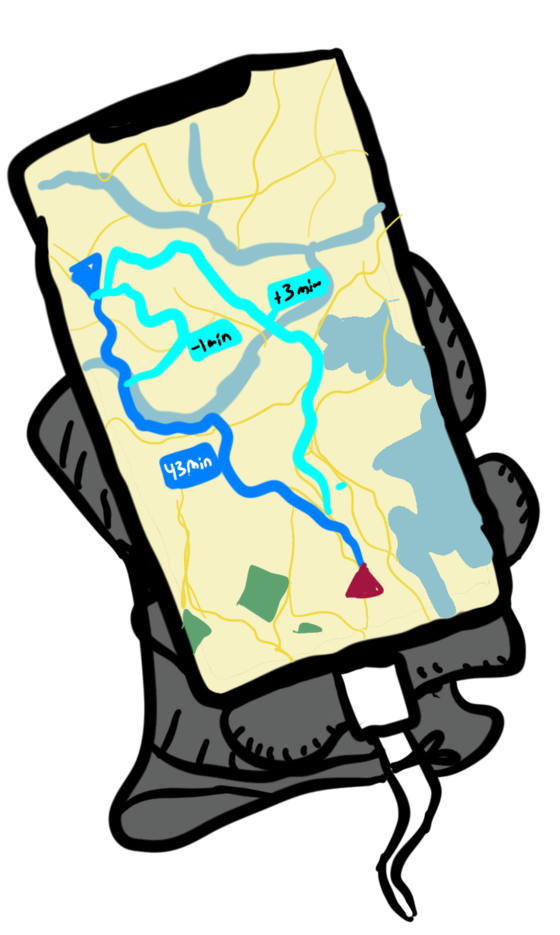 The GPS offered 3 or so paths, recommending one, saying this other one might be -1 minute faster, this other one +2 minutes slower, another route is estimated at about the same length of time. Something like that.

So here's the thing: I think it is blatantly obvious that one of those routes will be the fastest. And it is also obvious that you can't KNOW which one it is. You can guess which one is most likely to be best, but there's a fundamental unknowability there, once the rubber meets the road, and since we can't rewind our lives and try again we have to live with never quite being certain. (I think of Milan Kundera: "We never know what to want, because, living only one life, we can neither compare it with our previous lives nor perfect it in our lives to come.")

Of course, the metaphor is imperfect. For example, "fastest route" is such a crisp, obvious metric. Even in car navigation land, we can think of other things we might want to optimize for, like "fewest turns" or "least stressful drive" or "not taking me near my ex's house and dredging up painful memories". And compared to the myriad of possible goals and corresponding "shoulds" that come from ethical systems, figuring out where or when to turn left or right is pretty simple.

More troublingly for the truth of the metaphor: the stakes of ethics feel so high, which might be a result of the fear of fire and brimstone I took on as a youth. It's as if the GPS wasn't saying "take the wrong route and risk being ten minutes late", but "the wrong route might have dragons or pits or explosions and you will probably die!"

Researchers talk about "maximizers vs satisficers" - people who take pains to seek out the very best solution vs folks who can make a quick decision and be happy with it - usually I'm very content being in the latter group - but when it comes to morality, when I'm dealing with these systems many of which say "people who don't believe this will be punished eternally" and those stakes are taken very seriously by millions of believers, I find it hard to just let go and follow whatever the GPS thinks best.