from Lynne Murphy's "The Prodigal Tongue"

How long is a piece of string?

British idiom I hadn't heard of, but like immensely. It reminds me a bit of my Nana's answer to her daughters' incessant "Why?"s - "Why is a cow?"

This "outlandish" (a good Anglo-Saxon word for 'foreign') vocabulary

I do love when a word's origins are revealed to have been hiding in plain site - I had never thought of "outlandish" as out-land-ish! Or like how a "secretary" keeps secrets...

It's a game of inches: 'progress towards a goal comes in small increments'

This was the one entry from a list of explicated sport metaphors where I wasn't sure I agreed - progress in American football is often made in great bounds, exciting, yard-consuming catches and runs - but the final result is then measured painstakingly, and the difference in success and failure can be a heartbreakingly small amount.

English isn't arithmetic , but many people want it to have clear rules like 2 + 2 = 4 . Rules themselves are not a problem. The problems come when so - called grammar fans conclude that if one rule is right , then anything else is illogical. That's just not a logical way of thinking . It's like saying that if 1 + 4 = 5 , then 1 + 1 + 3 cannot also equal 5. Nevertheless if there are two ways to spell a word or construct a sentence, then people will conclude that one way must be the better way [...] So if someone tells you that a word cannot mean X because it already means Y or that we should all stop saying Z because it is logically inconsistent, just say to yourself: here is a person who doesn't have a very good sense of how English works. If you want to entertain yourself, you can point out the inconsistencies of their argument. If you want an easy life, you can just ignore them--up to a point. If you see that person spinning their illogical yarns in front of a classroom or a government education department, you have a moral duty to step in.

For Wagner, as for most speakers of British English, a frown is an expression of displeasure that involves contracting the brow. But for me, and many speakers of American English, frowning involves turning down the corners of the mouth to indicate unhappiness, and more particularly sadness. That meaning is a 20th-century invention, and most American dictionaries have not yet noticed it. Some (mostly older) Americans still have the 'brow'-only meaning. But the new meaning is widespread, and more American than British, as our emoji names show. The ☹ is most commonly called sadface in British English, whereas it's frown or frowny face in many American contexts--including the standards document for Unicode, the international (but Americentric) body that approves new computer symbols.


I remember discovering the "frown = brows" thing playing Pictionary (in English) with some German friends...

A wise American reporter based in London once told me that every British news story is, deep down, about class. Every American story, he said, is about race.

A 1642 Massachusetts law saw illiteracy as child abuse. Parents could lose custody of their children if they were not taught to read. By the end of that century, most of the northern colonies had similar laws. By 1800 the United States had the highest literacy rate in the world. "Nearly every child, even those of beggars and blacks in considerable numbers, can read, write, and keep accounts," reported the president of Yale College in 1823. This was less true in the South, where several colonies, starting in the mid-1700s, had made it a crime to teach slaves to write. But until the decades just before the Civil War, it was no crime to teach enslaved people to read. Writing could be a tool for rebellion, but reading was a spiritual necessity.

I wasn't aware or had forgotten that you can read without knowing how to write. I wonder if that's like being able to understand a foreign language a bit, but not speak it well.

Murphy also talks about diagramming sentences - a pursuit much more popular in the USA, according to Murphy. You would think a literate and lego-loving nerd like me would love diagramming sentences, but I hated it. I remember writing bitter complaints about how having to crucify these poor sentences. In hindsight, I guess it felt like I was just painstakingly giving arbitrary symbols to things without gaining new insight into how the parts interacted...

I found an old blog post mentioning "Too Close for Comfort", a sitcom name I was trying to remember. "Too Close for Comfort" is a kind of early prototypical early-80s sitcom that I don't think many people remember very well, a post-Mary Tyler Show vehicle for Ted Knight. I mostly remember a character (probably his) was talking about his comic character "Cosmic Cow" and how the secret was being able to draw an inoffensive udder... I think about that whenever I see a cartoon cow, especially one walking upright. 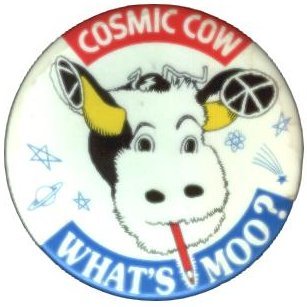