the elephant and the rider redux

ramble
July 27, 2019
I often speak of the metaphor of "the elephant and the rider"; how we pretend it's our inner-voice, our narrator-self, that is running the show, but actually that part of us is just justifying the gallumping about the emotional elephant has done as the rider clings on. (With time and patience the rider can train the elephant somewhat and coax better behaviors - that's what growing up is all about - but a beastliness remains.)

These riders get so good at telling the stories of why we do what we do, but fudging the timestamps so the explanation sounds like a reasoned decision and not a post-facto justification. Thus an illusion of rationality and thoughtfulness is preserved, and a our trustworthiness is advertised to our fellow humans, and to our selves. 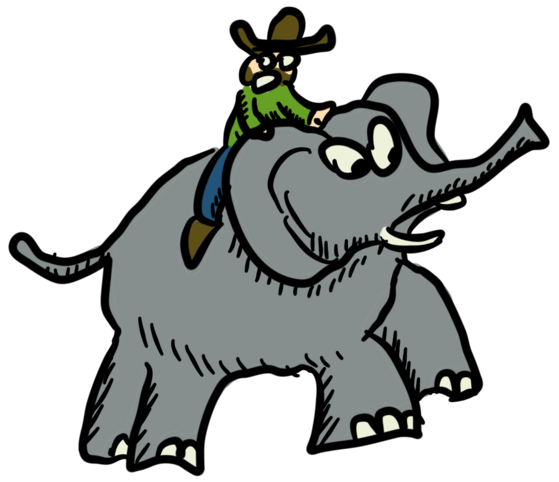 I worry that people in the social media age seem to go out of their way to work up the elephant, as if they WANT to feel, not think. It's not enough to just identify and categorize things as desirable / undesirable, we are compelled to JUDGE - to say this makes my elephant happy and so I am FOR it! Or -- this is terrible and me and my elephant are on TEAM AGAINST IT.

It might be true that getting the elephant charged up is probably critical to taking action (in fact a friend corrected me that his depression isn't a manifestation of irrationality - it's his fully rational rider unable to prod his comatose elephant into action - there's just no feeling and energy to DO anything, even something as seemingly necessary as to get out of bed) but when problems are too big for individual or even group action to change, helpless rage - the elephant ramming itself into the side of the enclosure the rider has constructed for it - results.

I've quipped that one consolation of death is that, finally, my awareness of the big problems of the world will shrink to match my capacities to fix the big problems of the world. That's pretty morbid! The balance of that whole serenity prayer thing - acceptance of what we can not change, courage to change what we can, the wisdom to know the difference - seems wiser and wiser the more I think on it.

So, we persist. Firing up the elephant is a good way to show ourselves to be good members of our tribe, and acceptance in our tribe is important. (From a social evolution standpoint, being well-aligned with the wisdom embodied in the practices of your literal tribe was more important than being correct about any one issue! Lone humans didn't have great survival or mating prospects.) The cynical right labels the public elephanting "virtue signaling", but I can't for the life of me figure out what's so bad about honest signals that reflect a life valuing justice, fairness, and the prevention of harm.

And sometimes I use this story to explain my special snowflake status to myself: The hellfire elements of my religious childhood burnt themselves out in my adolescence, but left a scorchmark of compulsive need to prove my value - my worthiness as judged by objective criteria. (In this view, one's alignment with objective truth can never be proven or fully certain, but rationality - a rationality aware of the limits of its methods - seems like a critical component in avoiding absurdities.)

So it's as if MY emotional elephant, a love- and validation-seeking beasts in most everyone, is more willing than most to elevate my rider - giving rationality a boost up with its mighty trunk, and letting that rider guide the elephant to trample over proto-emotions before they grow into something that might distract the elephant. As far as I can tell, love and lust and loyalty are all more inspected and less intuitively and spontaneously enjoyed in me than with many folks. But I seem less prone to addictive or risk-taking behaviors. (I'm taking pains to avoid sounding a facile "why am I the ONLY RATIONAL ONE around here" argument here - I suspect being this flavor of mild pseudo-intellectual neurotic isn't the best way to live. Also, if I'm honest, my elephant's intense pomposity too often drives me to self-limiting avoidance behaviors, where it's so much easier to not try and not succeed than to try and fail and have my limitations shown off to me and the world.)

From my devblog: developers and hot hands...