Because they had not repented, the angel stabbed the unrepentant couple thirteen times, with its sword.

I've linked to the Lyttle Lytton contest before - it's a much easier to digest version of the famous Bulwer-Lytton contest of bad hypothetical opening lines. The Lyttle version demands concise openings (the original contest leans towards these long rambling compound sentences) and then presents the winners and runners-up in a directory's commentary format, but formats things so it's easy to ignore the comments and focus on entries. Does anyone remember "Sniglets"? new made up words describing common shared experiences? here's one I'm just making up now:


Linktarrhea: when you paste a URL or link into a document or email and it becomes or remains a link but then you can't write anything after the link without it becoming part of the underlined content, no matter how stupid it looks.

So silly that it's 2019 and I'm still fighting with this issue-- any program should know that it's exceedingly rare (and bad design) for a link text to include paragraphs, so pressing return and inserting a line break should clearly end the damn link.

I think of that little six-step dance I do if I experience Linktarrhea and want to get past it: hit undo to remove the characters I just typed and eventually the URL I pasted, type a few throw away letters, move the cursor back to where I wanted the link, paste it again, move the cursor to after the throw-aways and start typing the word I actually wanted to type, then go back and erase the throw-away letters. Cha-cha-cha.

WYSIWYG? More like WYSIBS. Bowed skull glitter tattoo for me, unicorn facepaint for the little lady at Middleboro Krazy Days. 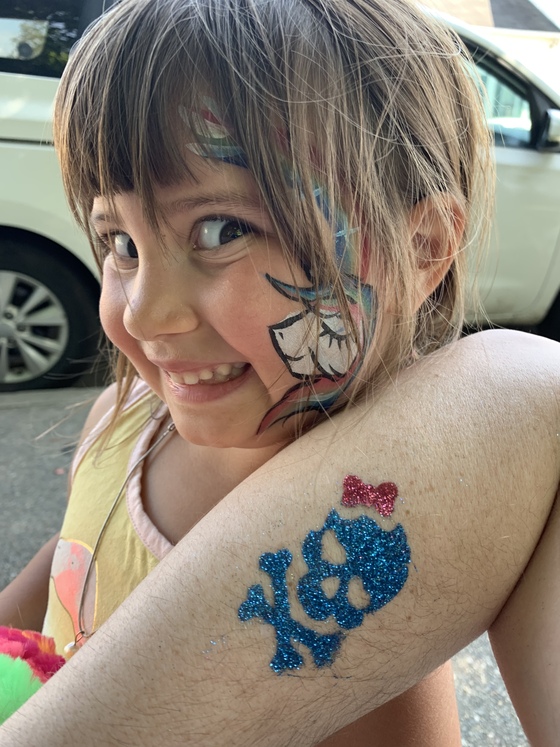