August 31, 2019
via kottke, Kaiser Kuo's long form attempt to answer “Why don’t you Chinese hate your government as much as we think you ought to?”

So try telling a Chinese person that anyone willing to trade a little personal liberty for a little personal safety deserves neither liberty nor safety, and they’ll look at you like you’re insane. Therein lies the values gap.

One term the early part of the essay uses a lot is "contingent" - i.e. values that many Americans assume are universal and self-evident are actually dependent on quite a lot of factors of our history. (It was an awareness of a similar sense of "contingency" that fed into my loss of religious faith as a teen: the faith I had learned had declared itself to be universal and absolute - or worthless.)

The essay also reminds me that I don't value freedom as the ultimate good for its own sake, but as an important means to other ends. (And since I am no solipsist, I realize that universal freedom for everyone would be chaos that would curtail practical freedom for most.) I think the greatest purpose for humanity is the creation of categorical novelty; we are the only species we know of able to generate new memetic concepts on the regular - and the system that can generate the most novelty overall has to have a balance of freedom (so new ideas can come out) and stability (so that the environment to generate those new ideas will be preserved.) And in the meanwhile, it's also important to extinguish suffering where we can. Five years ago I assembled my Usenet .sig quotes, mostly from the late 90s. I'm impressed with how much I like so many of them! I guess I was being rather selective - these were the ones I was willing to make part of my persona in the footer of my public posts. 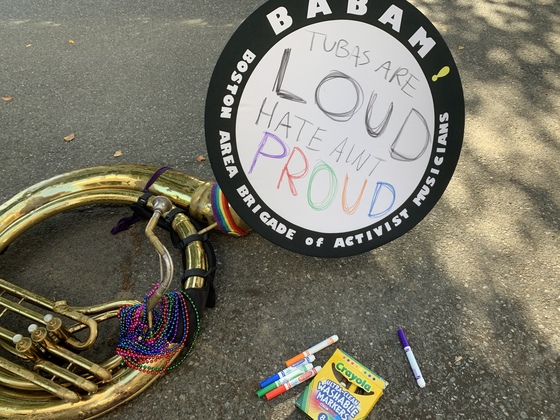 Here's a tweet with a video of the Dum duh Dum Didee Duh loop we played at the dumb-ass Trump float (the one in the "Straight Pride" parade that was like 95% dudes...) At counter-rallies you have to be careful not to be seen like you're playing FOR the jerks you're freespeeching against...