wisestphotostravelnola2019
December 10, 2019
Melissa and I are about halfway done with our NOLA getaway... here are some photos splitting the difference between "documenting our trip" and "I like the way this photo came out" (so not showing all the food diary shots, I'm better at eating food than photographing it.) 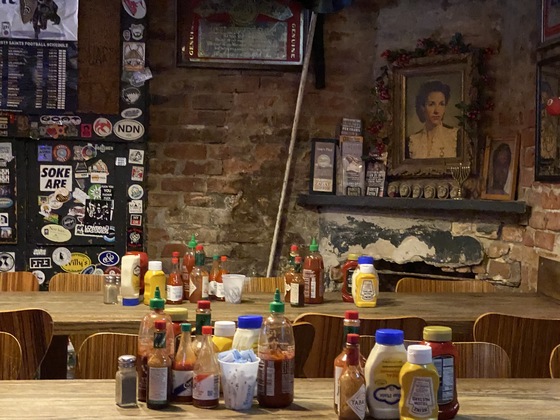 We arrive Sunday afternoon - the hotel concierge (Roy at the Maison on Dupuy) suggests hitting the French Market and then Coop's, local favorite but with a great tourist-friendly "Taste Plate" - Rabbit & Sausage Jambalaya is Melissa's favorite NOLA food so far. But this shot expresses how the locals feel about hot sauce... 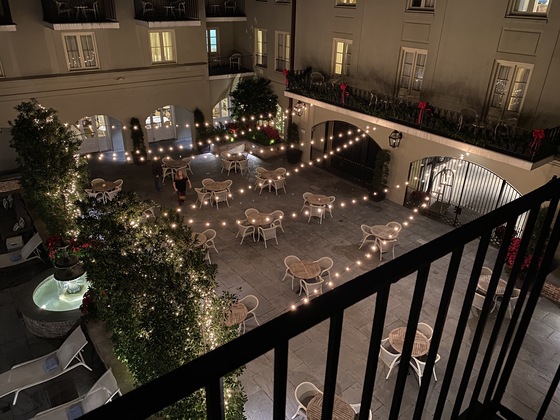 View from our Balcony at the Maison Dupuy... the hotel restaurant is playing some great jazzy pop but with a Christmas bend, which always feels like a disconnect to witness in a land with palm trees (I'm not sure if it's just the tourist aspect but NOLA seems more into Christmas than Boston.) 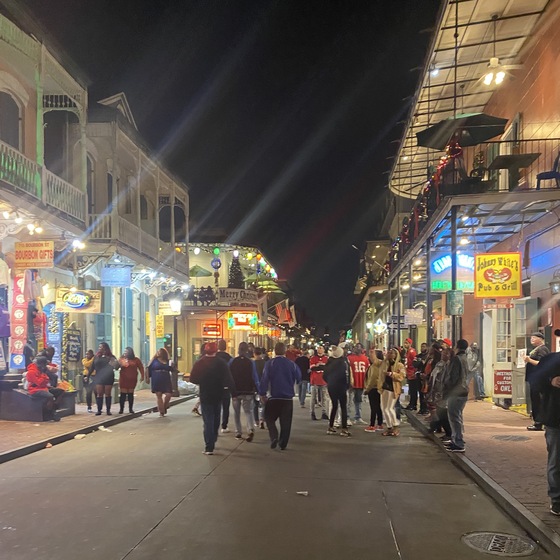 Bourbon Street at night - earlier we were walking around the French Market, the Saints were playing the 49ers, and a lot of fans were in the area at night (we nervously split when we saw a Mardi Gras-esque float by the 49ers fans approaching, not sure how it was going to be received...) Before that we grabbed a Muffuletta and a link of Alligator Sausage. 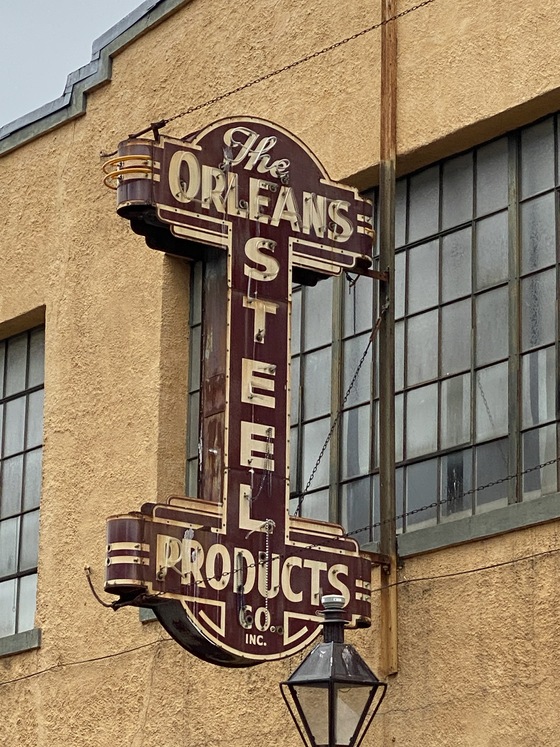 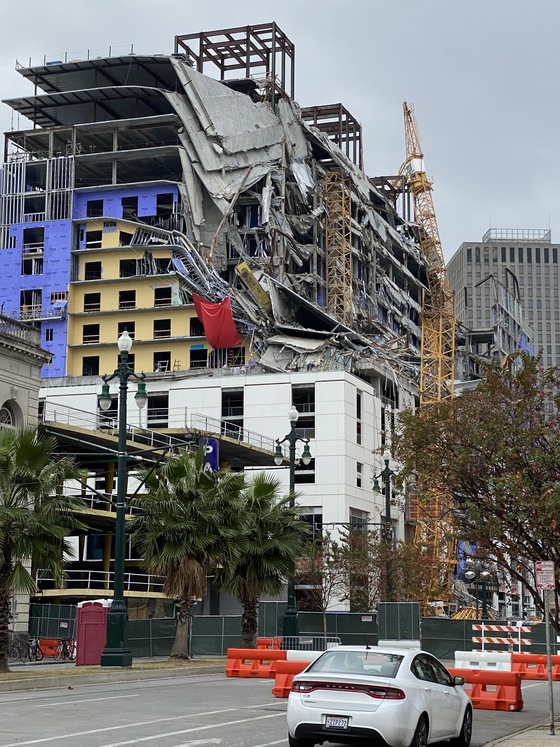 Waiting for a tour bus we got a second look at something our cab driver from the airport had pointed out - in October an under-construction building (future Hard Rock Cafe hotel) had partially collapsed. 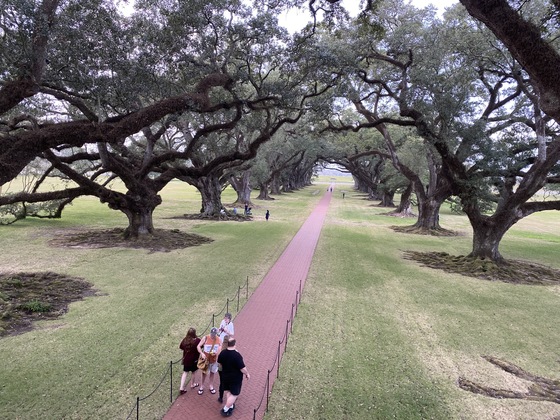 Our destination was the Whitney and Oak Alley Plantations. Whitney is strongly focused on presenting the perspective of the enslaved people that so much was taken from - including the heroic tragedy of the 1811 German Coast uprising. Oak Alley (as seen in many films including Interview with the Vampire) is also very careful at showing the human cost and not whitewashing the period. Photograph from the balcony of the main house there. 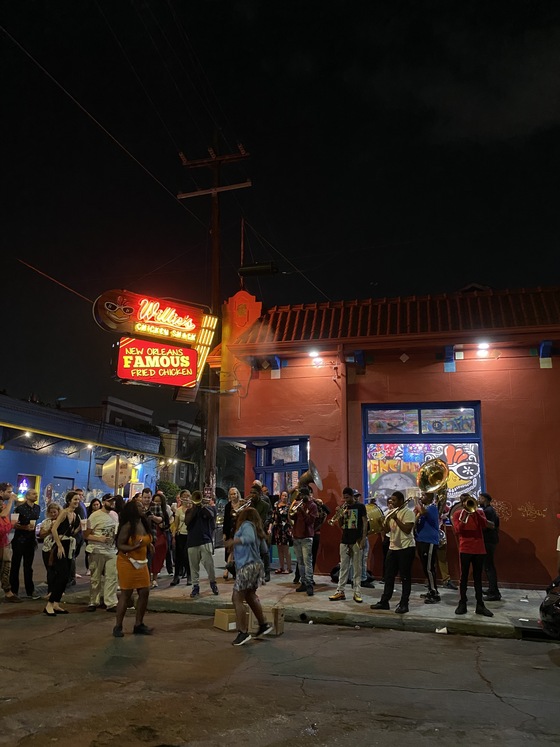 After dinner at Mahoney's we went to Frenchmen Street - The Young Fellaz, a group I knew a bit from HONK! in October, were in full effect on the corner. (After their set I went up and one of the tuba players let me borrow his horn (I had brought my own mouthpiece), and a few of the players briefly jammed over my signature bass line Space Cadet) 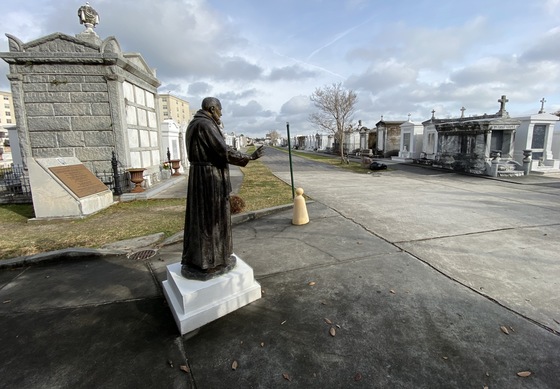 Tuesday bright and early we headed out for a city bus tour - you get a local telling you great stories and you cover more geography than on foot... we stopped at St. Louis Cemetery No. 3. (The NOLA burial traditions are fascinating.) 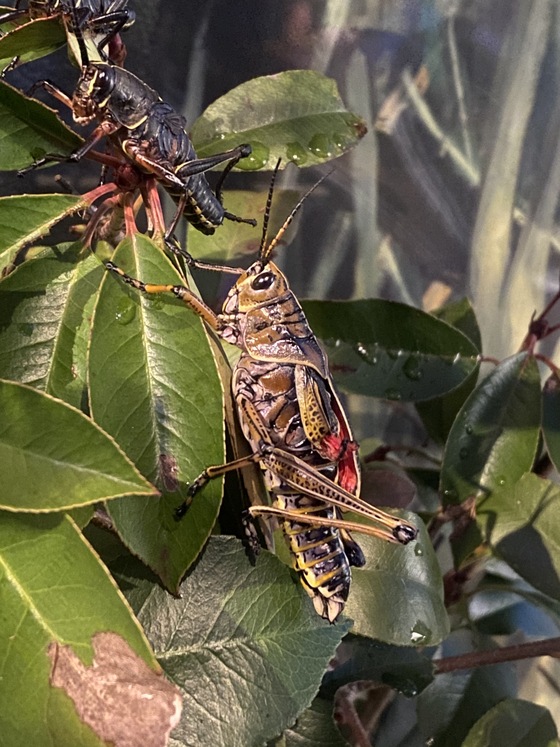 After the tour we went to the Audubon Insectarium - once upon a time a fellow student in a photography adult ed class asked me (in her charming irish brogue) "ooo, y'like boogs, doncha?" and I sort of denied it but you know, she wasn't wrong. 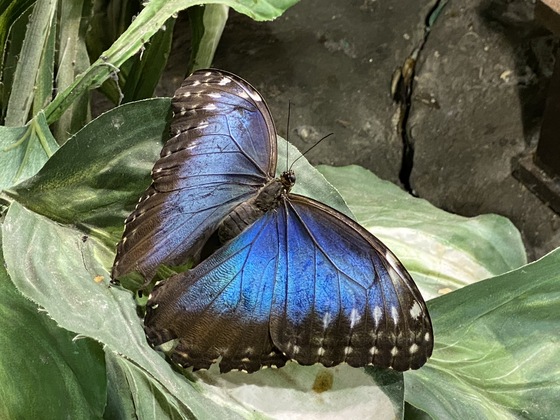 The Insectarium even has a cafeteria where you can sample crickets and waxworms in various preparations, like hummus and chocolate-chip-ish cookies, but the Butterfly Garden was more photogenic...

Believe those who are seeking the truth. Doubt those who find it.

Found this quote I grabbed 16 years ago... it really summarizes an important aspect of my philosophy. There is an objective truth, and you should feel compelled to align yourself with it, but you can never be certain you're there, and an important part of both understanding both probability and empathy is to be respectful of other's view of it, so long as there is a good chance they are being sincere and not obviously cynically manipulated.

The universe of ideas is just as little independent of the nature of our experiences as clothes are of the form of the human body.