the art of too many books 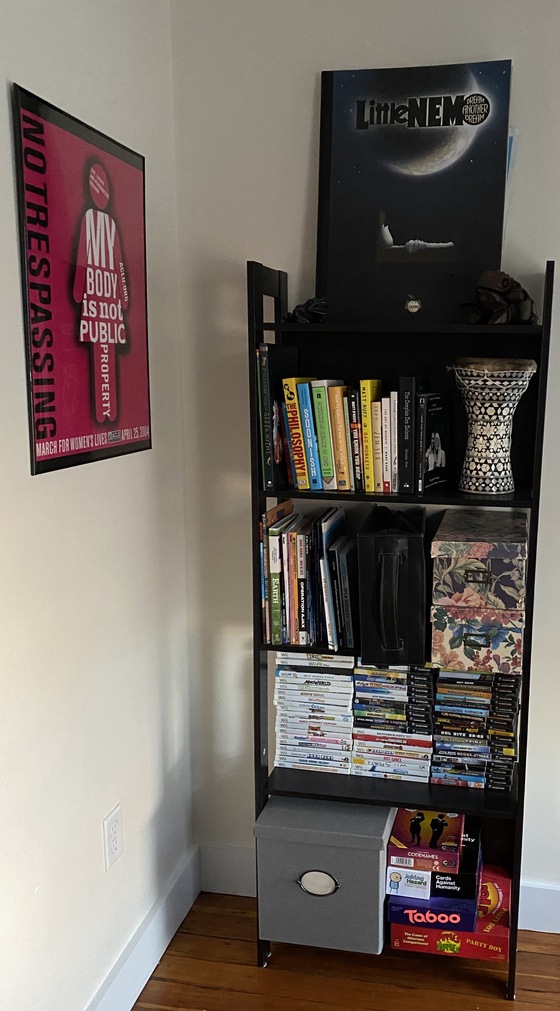 A new IKEA bookshelf, with dedicated tsundoku space
My friend John linked to this great article on The value of owning more books than you can read ("Or, how I learned to stop worrying and love my tsundoku" - note, that page is oddly ad-heavy, consider viewing with an Ad-Blocker or in Safari's bare "Reader" mode) The upshot is, rather than being a swaggering display of "look how much I've read!" an overflowing set of bookshelves can carry a more balanced message of "look at how much I have to learn... but would like to!". The Japanese term for this reading material purchased but left unread is "tsundoku" (As the article says, that's a more sensible term than "antilibrary" which some posit.)

And you can have those legions of unread volumes without overmuch fear of being an academic poseur - in the Paris Review Umbert Eco cites Pierre Bayard's "How to Talk About Books You Haven't Read":

Good libraries hold several millions of books: even if we read a book a day, we would read only 365 a year, around 3,600 in ten years, and between the ages of ten and eighty we'll have read only 25,200.

Bayard's book goes on to explain how educated people can still have a reliable awareness of the gist of important works. (I find that view approving of summaries intuitively appealing - there are many works -- books, movies, tv series etc -- where I'd rather read the wikipedia summary of than sacrifice to take on the original content in its entirety. As long as I am suitably humble about the second hand nature of my knowledge, I'll be OK.)

All this is an interesting contrast to some of the current hip minimalism, that whole KonMari thing. I've noted that sometimes in decluttering, we are closing the door on alternate paths, repressing hopes for our future or alternative selves that have made more time to enjoy various pursuits. Thus, an appreciation of tsundoku can seem to be the antithesis of that minimalist impulse to pare down to what is truly actively enjoyed! --Though in practice a good curation might still leave the heart of those unread libraries intact, as long as it's worthy stuff that remains.

Understanding how little of the vast universe of worthy material out there we can possibly consume is one part of accepting the finitude of life. For people who turned away from intense religiosity in their youth, it can be very painful - as children so many of us were promised infinite time! (For a delicious deep pondering of that, Julian Barnes "A History of the World in 10 1/2 Chapters" ends with a study of how ill-equipped we are to deal with a vision of heaven roughly like our own reality, but with every whim fulfilled, and extended to infinity. Or more simply, as Susan Ertz puts it: "... millions long for immortality who don't know what to do with themselves on a rainy Sunday afternoon.")

Lately I've been having some parallel coming-to-terms with my own chronological limits, the curation of my own free time that I am compelled to undertake. Even apart from my concerns of "not reading enough", I used to carve out more time for video games - both for the playing of them, and then for the programming of my own humble toys and games. When I assess where that time might be going, I see time practicing and performing with community and activist bands - a high quality activity on many levels, but not inexpensive in terms of hours. Ditto for the work I do on Porchfest websites, empowering organizers to manage these lovely weekend events where scores of musicians can connect with legions of listeners. And I take time to be with my sweetie Melissa - from just being around each other to more intimate times to taking in enjoyable streaming series and movies, that all enhances my life as well.

(Of course, one aspect of many one-on-one relationships is that whole wedding-ish vow of "forsaking all others" - this is yet another parallel to the unread books issue... humans have a distinct talent for making ourselves miserable playing "What-If" and "Mighta-Been" - that's some of why I got a tattoo saying "THIS FATE" - Amor Fati, the love of the situation actually is, not these other worlds that don't materially exist.)

Learning to love the potentials that will be forever untapped is an art unto itself! Cultivate a contentment with discontent, a certain satisfaction with an unfulfillable aspiration...

Had we but World enough, and Time,
This coyness Lady were no crime.

This poem's open rattling in my head after this morning's ramble...