One is the use of the verb "do" for crimes. (Vs "commit", I guess) Is this a new thing? On Gruber's podcast he was using it in a discussion on encryption (specifically how Paul Manafort thought he was being clever using WhatsApp to communicate for his illicit activities, but the backups were still available to authorities - so like "if you're going to do crimes, don't use WhatsApp to talk about what you're doing.")

"Do crimes" (Or adventures) does sound kind of cool, I admit. Is it a sort of new construction? In other words, are people using it feeling like they're being a little amusing and deliberately avoiding the older fussier and more traditional "commit crimes" or worse "criminal acts"

Secondly, the quote I put in this comic continues to gain gravitas for me. 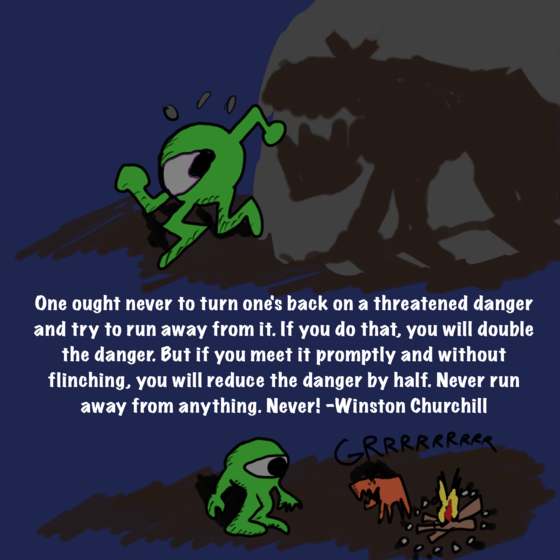 I'm still wondering if I could somehow improve the comic I made for it- I think the first panel does an ok job of showing the threat feeling amplified, but maybe not increasing the danger. (Or maybe it is a lot more dangerous to have your back to an alien dog...)

But still. So often I can be bullied by the dumbest ass little tasks on my todo list. Like maybe I get anxious that a band I'm in won't be able to pull together a big enough group for a gig... like that possibility is what it is, but letting the email from the person looking for a group stew in my inbox helps nothing - in fact it reduces the chances of finding a good plan B or making a pitch to my bandmates if I think it's a really important thing.

Or, dozens of other tasks that might bruise my tender ego by not being as easy as they should be, or just might go wrong in general.

So that pile of email and undone todos grows and grows and makes it hard to do anything, and even easy but time sensitive things get lost. Churchill was right, I could have halved the danger! (Rather than just self-medicating with social media or pursuing web esoterica, like a junkie nodding off in an opium haze...)