Straightened up the stand under the TV a bit yesterday, it's been a chaotic mess for a while.

Got sad about my tendency to have old video game systems around, ready to play, and then hardly ever doing so. A fair number of foolhardy purchases, a system I spend big-ish on, play a bit, and then not much again. (Like, the PS4 VR Helmet, where the only memorable thing I've done with it is a single X-wing mission in Battlefront - though in that case I was kind of goaded by my erstwhile buddy for not practicing what I preach in terms of neophilia.)

Or the older systems, stacks and stacks of games for some of those. Of course, it's extra melancholy... in the Aughts I'd run quarterly or so gaming get togethers, and now my pipe dreams of getting some like that again (or even adjacent to my birthday party) seems even more pathetic in the shadow of COVID. (Never been a big fan of online play - as with music streaming, I think the tech is moving away from my preferences.)

There's so much interesting stuff in games. So weird to think about how many programmer and designer hours went into so many of these, and how forgotten so many will be. I suppose that's true for other big media things, like movies. And when I think about culling my collection... I dunno... Should old a-game-ance be forgot, and ne'er brought to mind?

Finally, as I rejiggered the tv connections, sometimes it would lapse to broadcast TV. I don't watch much live TV, so commercials already seem a bit odd... and now, all the ones remade under COVID times are truly bizarre feeling. Toyota talking about how they will still keep their repair centers staffed in a socially distanced way, Taco Bell making some offer of free Doritos Locos on some specific day... "family" and "safety" seemed to be a big point of emphasis in a lot of them. Oddly whimsical Soviet "There is No God" poster. 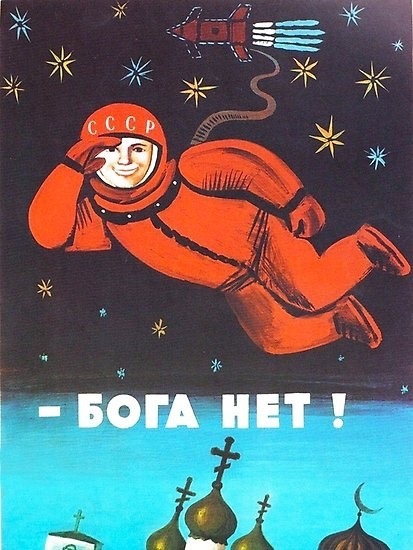 I suppose this is subject to "and now there is no Soviet Union" retorts... YIIIIIIIIIIIIIIIIIIIIIIIIKES - Big Bird was slated to be on the Space Shuttle Challenger, the one that exploded. Good lord, I never thought the death of teacher Christa McAuliffe and the other astronauts could be the less-bad scenario.