But scientifically speaking I think social scientists mean a particular thing when they use the term 'happiness' or 'well-being', and this is the definition I end up using in the course, which is that you can basically say you're happy if you have a lot of well-being in your life, and for your life. And what we mean by that is happiness in your life is the sort of... almost hedonistic kind of positive emotion-type stuff. You're happy in your life if you have lots of positive emotions, and laughter, and so on, and not many negative emotions, like relatively speaking there's not a tremendous amount of sadness, and anger, although we can debate about how much of that you want. But that's kind of being happy *in* your life. But there's another feature that the social scientists really care about, and that's you're happy *with* your life. And so that's basically your answer to the question, all things considered, how satisfied are you with your life right now?

This two sided approach to happiness - happy in your life AND with your life - is a better answer to that issue of, most people would decline a drug that made them happy but dysfunctionally stupid forever... my previous answer was "well it's the 'wrong type' of happiness" but this dichotomy labels it more neatly Non-Americans Are Baffled By Some Of The Things Americans Do In Movies (30 Tweets)Most of these were pretty much "yes" tho less so chips ON sandwiches Melissa and I watched "SNL-from-home" last night.

Never anticipated that a side-effect of a major worldwide pandemic would be turning all entertainers who usually work with studio audiences into basically less-polished Youtubers.

It is fascinating to see entertainers homes though. (Especially SNL, where the same room is going to be used for multiple skits.)

You rarely have time for everything you want in this life, so you need to make choices. And hopefully your choices can come from a deep sense of who you are.

Third in (what is apparently becoming) a series: 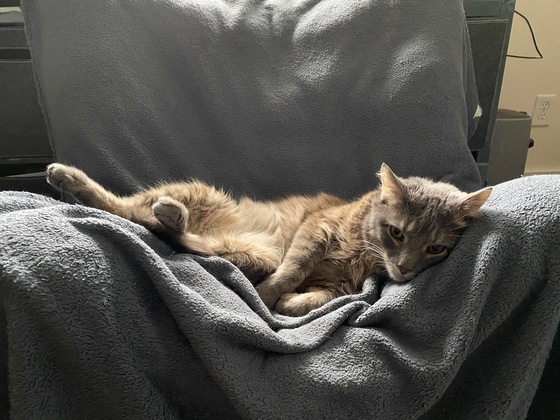 Just something about that cat and that chair... I'm grateful we're on the upswing for daylight! Third floor benefit, even on an overcast day on a fifth week of mostly being inside, the amount of natural light is helpful...

When somebody is the president of the United States, the authority is total, and that's the way it's gotta be.

The President doesn't have total authority. We have a Constitution. We don't have a king.