Just added a cheap monitor for use in portrait mode, for background stuff. Some might say "but six screens? isn't that too many?" To which I say... too many? or JUST ENOUGH. (laptop for music and quick social media diversions, phone, 3 screens for work, and an iPad for a todo list... also as a 4th screen w/ a stylus to act as a tablet.) 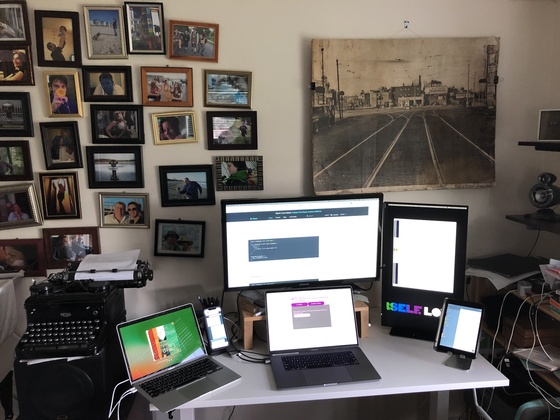 Arthur "Two Sheds" Jackson ain't got nuthin' on me. (As I actually go to use this setup more... I think I can go back to using my phone for music and leave the other laptop aside... a little clear deskspace is nice to have. Glad I kept my phone cradle that has lightning + aux passthrough)

The seed must grow regardless of the fact that it's planted in stone.

Interesting that some universities are at least suspending SAT/ACT test requirements. Obviously a pragmatic move when there might not be places to actually take the test, but I wonder if it bodes poorly for the test in the long run?

I came from a well supported background (in terms of family and a public high school good high level classes) but nothing elite, and the test felt like a bit of an equalizer - even if now I understand I'm more a fast thinker than a smart one, and that there are all sorts of other biases that can be depressing the score for other folks. Heh. Just noticed the React tutorial is the same programming task I gave myself as a 9 or 10 year old kid: a 2-player only Tic Tac Toe game. (Ok, no, this is not demonstrably better than a piece of paper, that's not the point!) What's really striking for me is that it uses the same method of determining if there's a winner that I came up with as a kid - just see if any of the 8 ways of winning are filled with all "X"s or all "O"s. (I remember my Aunt saying she was impressed that I came up with that when I geekily showed off the method to her...)